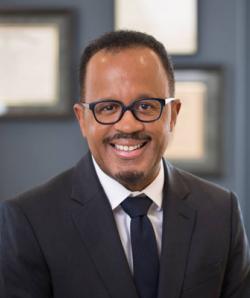 Voisin began his tenure at the Mandel School in January 2022 after serving for two and a half years as dean of the Factor-Inwentash Faculty of Social Work and the Sandra Rotman Endowed Chair in Social Work at the University of Toronto. Before this appointment, he was a professor at the School of Social Service Administration at the University of Chicago for two decades as well as a Faculty Affiliate at the Center for the Study of Race, Culture and Politics and the Center for Health and the Social Sciences. At the University of Chicago he was the director of the STI/HIV Intervention Network (SHINE) and co-director of the Chicago Center for HIV Elimination (CCHE).

His research examines how structural, racial violence and interpersonal forms of violence impacts health behaviors and outcomes among minority populations. Findings demonstrate the problems of neighborhood and racial violence exposures are correlated with youth mental health problems, school failure, negative peer networks and high rates of HIV-related risk behaviors, which are interconnected outcomes in the lives of adolescents, particularly those who live in low-resourced communities.

Voisin has published more than 160 peer-reviewed studies, with publications accepted in such journals as AIDS, AIDS Education and Prevention, American Journal of Orthopsychiatry, American Journal of Public Health, Children and Youth Services Review, Journal of Adolescent Health, and Journal of Health Psychology. His research has generated more than 11 million dollars in extramural funding from the National Institute of Mental Health, the National Institute of Child Health and Human Development and the W.T. Grant Foundation, among others. His research has informed public policy and provided support for the passage of the Soto, Delgado Bill approved by Illinois Governor Pat Quinn—the bill provides a state advisory council which will make recommendations to the Illinois Department of Public Health on effective prevention messages to deter youths from engaging in HIV-related sexual risk behaviors. Voisin's latest project is a book entitled, America the Beautiful and Violent: Black Youth and Neighborhood Trauma in Chicago, published by Columbia University Press in 2019. In this monograph, he highlights the broad historical, political, economic and racial factors that shape the construction, concentration and narratives of violence in Black neighborhoods. He explores these forces and the violence they produce, the behavioral health consequences of repeated exposures to neighborhood violence, and the ways youth, families and communities cope with such traumas.

Voisin was appointed a visiting professor during the summers of 2004, 2005 and 2007 at the Center for AIDS Prevention Studies in the Department of Medicine at the University of California, San Francisco. He was also appointed a consulting editor for Social Work: Journal of the National Association of Social Workers (2003–2008), the Journal of HIV/AIDS Education and Prevention (2004–2007) and the Journal of HIV/ AIDS and Social Services (2003–2010). In 2010, he was named co-editor of the Journal of HIV/AIDS and Social Services and from 2012–2013 he served on the editorial boards of the Journal of Adolescent Health, BMC Public Health and Social Work Research. The Office of Governor Pat Quinn appointed him to the Illinois Statewide Committee for Juvenile Justice Programs' Disproportionate Minority Contact Subcommittee in 2010 and to the Illinois African American Family Commission in 2013. In 2020, Voisin was elected a board member of the Society for Social Work and Research and in 2021 he was inducted as a fellow into the American Academy of Social Work and Social Welfare; he was appointed to their board in 2022.

Voisin has more than 30 years post-MSW clinical experience with practiced expertise in the areas of substance abuse, adult psychopathology and adolescent and family therapy. He has delivered many keynote speeches and conducted numerous training sessions for health care providers.

The phonetic spelling of “Voisin,” which means “neighbor” in French, is waz-zin or vwah-zan. Listen to the phonetic pronunciation here.

Gun culture: Canada compared to the United States
May 31, 2022

Experts look at 'great replacement theory' as motivation behind Buffalo mass shooting
May 23, 2022

Coulton and Voisin Among Top 2% Most-Cited Researchers in World
March 16, 2022

What would society look like without police?
Zocalo Public Square • December 10, 2020

Calls to defund and dismantle police forces are growing, but what does that mean?
The Sun Times • June 11, 2020

From taking a knee to taking a stand: Why anti Black racism in Canada cannot be ignored.
Global News • June 10, 2020

African Americans have been slowly suffocating under the chokehold of America’s systemic racism
The Toronto Star • June 7, 2020

“Concerns about China’s influence don’t end with the WHO expert says. They’re calling for sweeping reviews of international bodies”
The Toronto Star • April 15, 2020

“How indirect violence gets under a child’s skin and into the brain.”
Undark  • August 1, 2018

Policed to Death: Over Policing in Black Communities as a Public Health Threat
May 25, 2022

Think Showcase: The Next Generation of Health
February 02, 2022