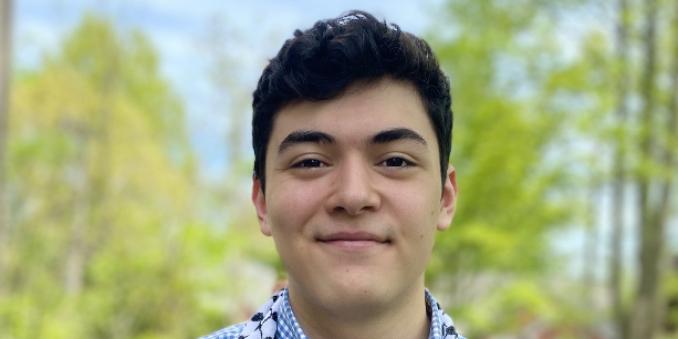 Fourth-year student Ibrahim Bazyan has been making an impact in his community as a volunteer for several organizations while also earning his bachelor's and master's degrees through the Mandel School’s 3+1 Nonprofit Management program.

During the early days of the pandemic when there were so many needs due to COVID-19, he wanted to help make a difference. Bazyan saw volunteer coalitions in other areas of the country providing access to groceries for vulnerable populations, but nothing existed in his hometown of Ashtabula, Ohio. To address that need, he founded The Neighbors Project (TNP).

TNP’s initial efforts were very successful —so much so the organization expanded its efforts to the Cleveland area to supplement other organized food drives and delivery programs. As pandemic restrictions were lifted, the need for the program diminished, so Bazyan is now restructuring the organization to find another way it can be helpful to Ashtabula County residents.

Bazyan is also heavily involved with the Ashtabula County Democratic Party, serving as its executive director. Leading the party gave him the privilege of working with many local and district races alongside the 2020 presidential campaign, he said, an experience that opened his eyes to the political, legislative and cultural changes he believes are needed for society to be more inclusive and equitable.

His MNO classes are teaching him strategies to lead organizations in the social sector, skills Bazyan is putting to use this summer at his internship with the Democratic Attorneys General Association.

“I’m grateful for the opportunities that the Mandel School has given me as a student early in my career,” said Bazyan, who is expected to graduate in January with his Master of Nonprofit Organizations (MNO) and Bachelor of Arts in psychology degrees after just four years. “I can’t wait to use the skills I have learned in the real world!"