Director's Message: Thank You and Best Wishes to Dr. Li

The Case Comprehensive Cancer Center (Case CCC) thanks Li Li, MD, PhD, MPH for his leadership and dedication to our mission since joining the center in the early 2000s. 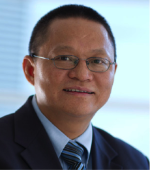 Dr. Li started his professional career as a lecturer in China, then moved to the United States where he was a research assistant at USC before pursuing his medical residency at the University of Kentucky. He settled in at Case Western Reserve University (CWRU) in 2000 and soon became an important part of our Center. His professional appointments and leadership experiences only expanded alongside his clinical responsibilities at University Hospitals Cleveland Medical Center over the past 18 years and we are grateful for his time spent with us. His is an example of career building at its best!

From 2001 to 2006, Dr. Li was a Damon Runyon-Lilly Clinical Investigator, establishing a large genetic epidemiology study of colon cancer to investigate complex gene-environment interactions. His research interests involve cancer, molecular/genetic epidemiology and disease prevention and the NCI has continuously funded his efforts. Dr. Li has made a significant contribution to the Oxford University-led international consortium for Colon Cancer Gene Discovery (CoGENT), and the USC-led Colorectal Transdisciplinary Study (CORECT) consortium. Since 2005, Dr. Li has served as Co-Director for the highly successful R25 Computational Genomic Epidemiology of Cancer (CoGEC) training program. A number of faculty are graduates of this successful program.  He was appointed acting and then fully chartered Associate Director for Cancer Prevention Research at the Case CCC in 2007, where he oversaw and promoted research across all aspects of population sciences. In 2015, Dr. Li also became the director and endowed chair of the Mary Ann Swetland Center for Environmental Health at CWRU SOM. His work has focused on gene-environment interactions, he has been a major contributor to the GI-SPORE, has focused on development and monitoring of cohorts for colon cancer and breast cancer risk and screening, and in linking population-based issues detected by geo-coding with disease and cancer risk. He has been highly collaborative. As a member of the Case CCC Executive Committee, Dr. Li contributed heavily to several CCSG renewals and led the integration of population sciences across our scientific programs. He is also a PI of the recently awarded multi-PI Cancer Disparities pre-SPORE P20 team, along with Drs. Monica Webb Hooper and Nate Berger.

In January, Dr. Li is relocating to the University of Virginia. He will be missed for his research expertise, leadership and mentorship. Thank you, Dr. Li!