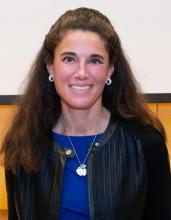 Jill Barnholtz-Sloan, PhD, is on The Cancer Genome Atlas (TCGA) team recognized by the American Association for Cancer Research (AACR) for its annual AACR Team Science Awards. The awards were made during the AACR Virtual Annual Meeting.

Barnholtz-Sloan is the Sally S. Morley Designated Professor in Brain Tumor Research, in the Department of Population and Quantitative Health Sciences at Case Western Reserve University School of Medicine. She also serves as Associate Director for Data Sciences at the Case Comprehensive Cancer Center, and associate director for Translational Informatics at the Cleveland Institute for Computational Biology.

The Cancer Genome Atlas Project began in 2006 as a joint effort between the National Cancer Institute (NCI) and the National Human Genome Research Institute, bringing together researchers from diverse disciplines and multiple institutions to create a detailed catalog of genomic changes associated with specific types of cancer. TCGA has since opened new avenues of research to improve the prevention, diagnosis and treatment of numerous cancers. The TCGA founders and current project team members are being recognized for their extensive collaborations and ongoing efforts to generate one of the largest-ever sets of tumor characterization data.

“It is an honor to be recognized as part of the team that has advanced the work of TCGA,” said Barnholtz-Sloan. “Our collaborative efforts to define standards and to harmonize and analyze massive amounts of data has contributed to important discoveries. My participation in TCGA focused on malignant brain tumors—glioblastoma and lower grade gliomas—where the work of TCGA on these tumors advanced national and international best practices in tumor characterization, diagnosis, and treatment for these rare but devastating forms of cancer.”

The AACR Team Science Award was established by the AACR and Eli Lilly and Co. in 2007 to acknowledge and catalyze the growing importance of interdisciplinary teams to the understanding of cancer and/or the translation of research discoveries into clinical cancer applications. The award recognizes an outstanding interdisciplinary team of researchers for their innovative and meritorious science that has advanced or may advance our fundamental knowledge of cancer, or a team that has applied existing knowledge to advancing the detection, diagnosis, prevention, or treatment of cancer.

Since its inception, TCGA has resulted in the molecular characterization of thousands of primary cancers spanning 33 cancer types. TCGA’s work has transformed the understanding of cancer, driven the development of new technologies, and enabled precision cancer medicine.

Learn more about the award, AACR and the list of recipients