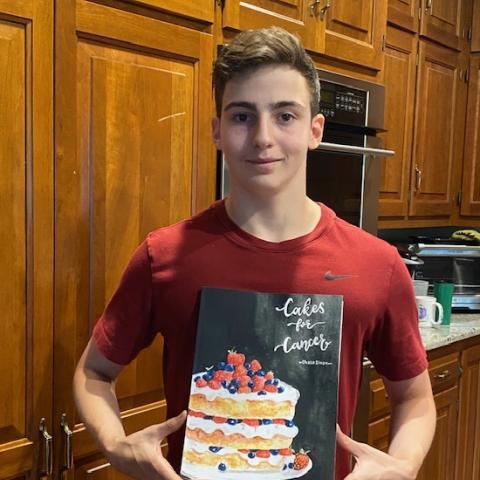 Chase Sloan, a 15-year-old sophomore at Hawken School and aspiring surgical oncologist, has always enjoyed cooking and baking. He hoped to one day create a cookbook, but that goal seemed far off until early March when the world was forced to essentially shut down due to the COVID-19 pandemic. It was then that Chase found the time to compile his recipes and publish them as a new cookbook, Cakes for Cancer. The cookbook is available through Amazon as an e-book or paperback. Chase will donate 75% of the proceeds to the American Association for Cancer Research and St. Jude Children’s Research Hospital.

The theme of the book was inspired by the recent loss of Anne Duli, a close family friend and long-time Associate Director for Administration for our Center, who passed away last summer following a long battle with breast cancer. Chase and his family spent much time at Anne’s home cooking dinner with her and her wife Ana, sharing recipes and stories. “Making food really brings people together. It makes people feel good,” said Chase. “I still go to Ana’s house weekly. We cook and talk about Anne. It has helped us both over the past year.”

Chase credits his parents, cancer researchers Drs. Jill Barnholtz-Sloan and Andy Sloan, with educating him first-hand on the value of research, and inspiring him to want to give back and change the world. "Cancer is such a power disease. It is indiscriminate. It doesn’t care if you have healthy habits. It can just come and wipe you out," said Chase. "I wanted to donate money to create a brighter future for better and more effective treatments."