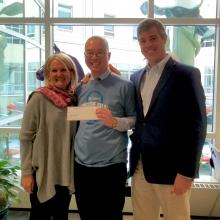 A gift of $25,000 from the I'm Not Done Yet Foundation will allow investigators to focus on potential applications of existing cancer drugs currently only available to adult multiple myeloma patients on clinical trials. This research, combined with promising developments in immunotherapy spearheaded at the Case CCC under Dr. Huang's leadership, represents new hope for enhanced treatment of sarcomas in young people. Roughly half of new osteosarcoma cases diagnosed in the United States occur in children and adolescent young adults. Despite aggressive combinations of chemotherapy and surgery, outcomes for these patients has not improved significantly over the past three decades.

Thanks to this support, Dr. Huang's team will obtain pre-clinical data to lend scientific support for the future development of a Phase I/II clinical trial targeting a common immuno-suppressive signaling pathway, the TGF-beta/TGF-beta Receptor pathway, within sarcoma microenvironment. An early Phase I trial in multiple myeloma at UH Seidman Cancer Center has shown safety, minimal toxicity and easy tolerability of a small molecule drug that targets the pathway responsible for the causing immune cell dysfunction. Pharmacological inhibition of this pathway has the potential to re-energize the patient's immune system, allowing for effective anti-tumor control of both primary and metastatic sarcomas. Over the next year, Dr. Huang's team will test this drug in vivo for its efficacy in various applications pertaining to these diseases. Additionally, data obtained from this pilot project will be leveraged further to compete for future funding from other agencies.

Elizabeth and Peter Menges, founders of the I'm Not Done Yet Foundation, recently visited Cleveland to present the funds to Dr. Huang for the project.