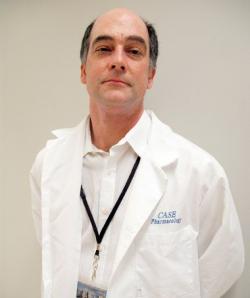 Cancer can be broadly defined as a hyper-proliferative disease, and the ability of these cells to replicate uncontrollably provides an obvious therapeutic target. Over the past 10 years as an independent investigator, my laboratory has developed several new chemical agents that function as anti-cancer agents against hematological and solid cancers.  The primary focus of our work is the development and biological testing of non-natural nucleosides/nucleotides that target DNA polymerase activity. My lab has produced ~40 different 5-substituted indolyl-deoxyribosides that mimic the core structure of deoxyadenosine. These efforts have been rewarding as we have published over thirty (30) research articles, four (4) review articles, and several book chapters on the development and application of these non-natural nucleotides as probes to monitor polymerases during replication. In addition, our research efforts have produced several patents for the use of these compounds to increase the effectiveness of other existing anti-cancer agents including temozolomide, cisplatin, and ionizing radiation.

Our research has impacted several scientific fields ranging from chemistry to biochemistry to cancer pharmacology. We have achieved several important milestones including:

We are now pursuing additional studies designed to propel these unique agents into Phase I and Phase II clinical trials.