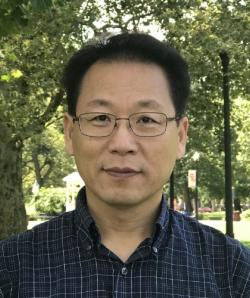 The goal of the proposed research is to determine whether systemic administration of a small molecule inhibitor of TGF-β signaling (TGF-β type 1 receptor/ALK5 inhibitor, Vactosertib;; TEW-7197) can ameliorate multiple myeloma (MM) progression and also potentiate the response to the proteasome inhibitors (PIs) in an established preclinical model of MM. The effort is also designed to determine the contribution of TGF-β-dependent mechanisms of resistance to PI therapy in MM.

My research has focused on the mechanisms underlying the pathogenesis of inflammation and cancer. I have maintained a longstanding focus on the role of Transforming Growth Factor-beta (TGF-b) in the regulation of immune cell development and function, with specific interests in the effects of TGF-b signaling on the processes of inflammation and cancer (my interest when I began as a post-doctoral fellow in Dr. Letterio’s laboratory in 2003 in the NCI). I have contributed substantially through the establishment and evaluation of mouse models to define important in vivo properties of the this signaling system, with the intent to better understand how these activities participate in the processes of inflammation, malignant transformation and tumor progression. In 2006, I transitioned my role from the NIH to Case Western Reserve University (CWRU), where I now independently pursue this focus with a greater emphasis on translational research, particularly the identification of therapeutic interventions based on successful application of either TGF-b agonists or antagonists in malignancy and immune disorders.

At CWRU, I have also continued a multidisciplinary programmatic effort through which I investigate molecular mechanisms mediating the effects of small molecules in the triterpenoid family (natural and synthetic). I have developed systematic structure-function studies, coupled with analyses in several preclinical disease models. My preclinical research has demonstrated that small molecules in the triterpenoid family are potent regulators of immune cell development and function and are highly effective in suppressing inflammatory-mediated disorders including inflammatory bowel disease (IBD) and inflammatory-driven colon carcinogenesis. Finally, I have been actively involved in training of graduate students and fellows.

In this proposal, I will closely collaborate with MedPacto Inc. (lead developer of Vactosertib) to investigate whether Vatcosertib suppresses MM progression and overcomes resistance to PI in MM. These study will greatly benefit from ongoing support from my close colleagues, Drs. Letterio and Huang, who serve as co-investigators on this proposal and who are a well-known expert in TGF-b biology, immunology, immunotherapy, and translational cancer research in blood cancers.

I have successfully administered the projects, collaborated with other researchers, and produced several peer-reviewed publications from each project. With my novel animal models, advanced research techniques, continued collaboration, and the excellent immunology and myeloma research environment at Case Western Research University, I am poised to embark on this exciting scientific exploration.

My long-term research goals are to elucidate the cellular and molecular mechanisms of autoimmune diseases, inflammation and cancer. This will lead to greater understanding of the link between these pathogeneses and the immune system, and development of therapeutically effective intervention strategies. In line with these long-term goals, three lines of research will be explored: 1) Mechanisms of Inflammation and Cancer, 2) Therapeutic Drugs for These Diseases, and 3) Cancer Immunotherapy by Inhibiting TGF-β Signaling. Modulation of inflammation and immune function are common integrative themes.

1. Mechanisms of Inflammation and Cancer

2. Therapeutic Drugs for These Diseases