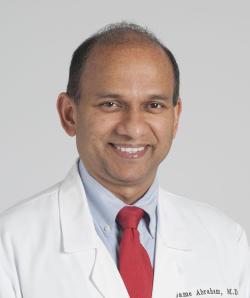 From 2013 to 2019, Dr. Abraham served as director of the Cleveland Clinic Breast Oncology Program, and co-Director of the Cleveland Clinic Comprehensive Breast Cancer Program, until he was promoted to Department Chairman. He has more than 17 years of experience of treating complicated breast cancer diagnoses, from early-stage to metastatic, and leading novel clinical trials.

At the NCI, Dr. Abraham was the study chair of several early-phase clinical trials that included novel treatments for breast cancer such as Ixabepilone, which was approved by the FDA in 2007. During his fellowship, Dr. Abraham edited the first edition of the Bethesda Handbook of Oncology (Lippincott Williams and Wilkins). Now in its 5th edition, it is one of the best-selling oncology textbooks in the world. It is considered the standard textbook by many universities and hospitals across the world.

After finishing fellowship, Dr. Abraham joined West Virginia University (WVU) in 2001 as an Assistant Professor. In 2005, he was appointed Chief of Hematology/Oncology and was later appointed as the first Bonnie Wells Wilson Distinguished Professor of Breast Cancer Research, and Professor of Medicine of WVU. While at WVU, Dr. Abraham established the first comprehensive breast cancer program in the state of West Virginia in 2002. He received several awards from WVU for patient care and teaching, including Attending of the Year and Teacher of the Year. His outstanding work in patient care was recognized by the Excellence in Clinical Medicine award from the Dean of the School of Medicine in 2010. He received an award from the President of India, Her Excellency Mrs. Pratibha Patil for his contribution to cancer care in 2010.