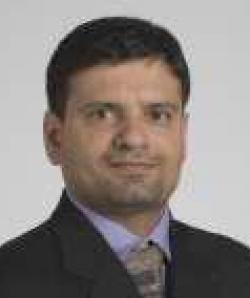 My research is focused on the role of chronic inflammation in cardiovascular disease (CVD) and lung cancer. Working at the Cleveland Clinic has been an excellent environment for testing my novel hypotheses about role of a minor phospholipid PIP2 in CVD and lung cancer. I was a recipient of the American Heart Association SDG grant to study the role of autophagy and phosphatidylinositol 4.5-bisphosphate (PIP2) in cholesterol efflux pathways.

In the past several years, I described the role of free cholesterol in inducing autophagy in macrophages and in upregulating sphingomyelin biosynthesis. PIP2 was thought to be exclusively restricted on the inner leaflet of the plasma membrane. My studies showed for the first time that PIP2 can also be flipped to the cell-surface and identified ABCA1 as the first reported PIP2 floppase from any system (Circulation Research 2016).

I received my first NIH R01 funding in 2020 to study the role of phosphatidylinositol (PIP2) metabolism/trafficking in atherosclerosis and inflammation. The current research interests of my work are based on the novel findings that PIP2 levels are modulated by cholesterol and cholesterol efflux transporter ABCA1 is regulated by PIP2. Given the major role of ABCA1 in reverse cholesterol transport and inflammation, I believe that these findings have the potential of opening a new area of investigation that can serve as a therapeutic target for preventing and treating CVD.

I am also working on a project to determine the role of PIP2 in lung cancer. The CANTOS trial showed that the anti-Interleukin-1β (IL-1β) antibody treatment reduced major adverse coronary event (MACE) in patients with elevated C-reactive protein. One of the interesting findings from this study was a retrospective analysis showing a marked reduction in the hazard ratio (HR) of lung cancer incidence in the two treatment groups (150 and 300 mg) compared with placebo controls, with a HR of 0.33 after 3.7 years of follow-up. These data indicated that the circulating mature IL-1β may promote progression of human lung cancer and IL-1β release pathways may serve as targets for novel lung cancer therapeutics. PIP2 regulates IL-1β release from macrophages. The direct role of PIP2 regulated IL-1β release pathways in the progression and metastasis of lung cancer in mice or humans is not yet explored. I am using a syngeneic mouse model, Lewis Lung Carcinoma (LLC), to determine the role of PIP2 in lung cancer. The advantage of using the LLC model in the syngeneic C57BL/6 mice is that the hosts are immunocompetent, rather than using a patient-derived xenograft model in immuno-deficient hosts. Case Comprehensive Cancer Center has kindly provided pilot funding to support this project and to gather preliminary data for submitting an NIH application.