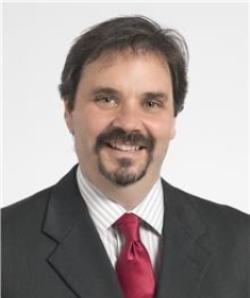 Dr. DeBernardo has been an active member in the NRG (formerly the GOG) since completing my fellowship in 2004. He has served as Co-Pl first at University Hospitals and currently at the Cleveland Clinic in Gynecologic Oncology Division. He was an active member on the GOG ancillary committee.

Since being a member of the GOG/NRG, he has a proven track record of collaborative work with a number of investigators. He has been an author on at least one GOG publication (Alvarez et al, Gynecol Oncol 2014 Jun; 133(3):433-8. In addition, he has published several manuscripts on Cyberknife radiotherapy (Kunos et al, Front Oncol 2015 Jun5;5:126.) and the use of hyperthermic chemotherapy for treatment of gynecologic cancers (Singh et al, Gynecol Oncol Case Rep 2014 May)He also has a long-standing collaborative relationship with a lab at Case Medical Center run by Michael Lederman that has resulted in numerous publications over the last 10 years. (Younes et al, J Clin Invest. 2016 Jul)More recently, he has had a productive collaboration with Dr. Reizes' laboratory at Cleveland Clinic, which has resulted in publication in high impact factor journals.

As an active Gynecologic Oncologist with a busy clinical practice, he has the opportunity to discuss and enroll patients in Phase l, Il and Ill trials available through the NRG as well as those open at the Cleveland Clinic and Case Medical Center. He is the Director of the Peritoneal Surface Malignancy Program at Cleveland Clinic and has extensive experience in hyperthermic intraperitoneal chemotherapy (HIPEC). He has a large referral base (including from outside Ohio) specifically for the HIPEC procedure for advanced ovarian cancer and other peritoneal malignancies, and will be one of the principal contributors of tumor specimens for Aim 2 of the current proposal.

To this point, the most important contribution to management of women with gynecologic cancer has to be the work Dr. DeBernardo has done in developing and implementing Cyberknife radiotherapy and to stereotactic radiotherapy in general in women with gynecologic cancers. Radiotherapy has traditionally used to as primary therapy in woman with cervical cancer and in the adjuvant setting in some woman with endometrial cancer. The use of radiation therapy for ovarian cancer has been very limited despite the fact that ovarian cancer is very radiosensitive. Further, in woman who have had recurrent disease after prior radiation therapy had few options. The body of my work in this area was to demonstrate that stereotactic radiotherapy was feasible, tolerable and beneficial in woman with recurrent endometrial, cervical, endometrial and to a lesser extent vulvar cancers. Many of these women had few if any other reasonable treatment options and we were able to demonstrate a significant clinical benefit rate. It was learned that while the local control of targeted lesions was excellent (&gt;95%) and the therapy was well tolerated, there was failure outside the treatment area. This led to investigating the concurrent use of chemotherapy with Cyberknife radiotherapy. They completed a single institution phase I trial combining carboplatin/gemcitabine with Cyberknife radiotherapy in woman with gynecologic cancers. This study demonstrated the safety of administering chemotherapy with high dose stereotactic radiation. This work has led to the increased use of stereotactic radiation at their institution as well as many centers across the country. Dr. DeBernardo's role in this was as Pl and he worked closely with Charles Kunos MD as well. The two of them were responsible for all aspects of this research from conceptual design, protocol development, recruiting patients, administering therapy and ultimately publication.