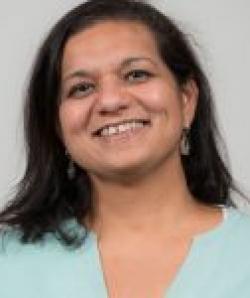 Dr. Sudha K. Iyengar is an internationally recognized genetic epidemiologist focused in the study of the genetics of vision, renal disease, and speech-sound disorder. She currently directs a multifaceted laboratory that bridges both bench and computational research. Her laboratory is responsible for identification of genes for many diseases, including novel genes for age-related macular degeneration (AMD), age-related cataract and Fuchs Endothelial Corneal Dystrophy (FECD).  She has a long track record in directing research that requires the management of large datasets and analysis with high density genome-wide linkage, genome-wide association, methylation analysis and next-generation sequencing type data, including workflows and quality control for exome sequencing, RNA-seq and ChIP seq. Four concurrent funded efforts in Dr. Iyengar’s portfolio include mapping the genetic architecture of diabetic retinopathy in South Asia, identifying genes, hormones, and behavioral deficits that predict speech-sound disorder, ocular clinical conditions (e.g. AMD) and the Million Veteran Program, and a project to perform a genome-wide association study for microbial keratitis leading to corneal ulcers.

I research molecular and statistical genetic dissection of multifactorial diseases; common chronic diseases of the eye and the kidney; speech sound disorder.

Her laboratory is responsible for identification of genes for many different diseases, most recently for Age-Related Macular Degeneration (AMD) and Fuchs’ Endothelial Corneal Dystrophy (FECD). Her research shows that these diseases are not necessarily caused by changes in a single gene, but by common and rare variation in many genes acting in conjunction. Finding these changes requires processing of information from many sources, including detailed family and medical histories of participants, using high-dimensional arrays or direct sequencing to capture information on the genome, harvesting tissue from affected individuals followed by functional genomic analysis to comprehend which genes show aberrant profiles, all of which her laboratory has accomplished. Having found novel genes for AMD and FECD, she has expanded her work and is now trying to understand why these changes lead to disease. Thus, the scope of her research is broad, multidisciplinary, and frequently collaborative with other disciplines.

Findings from her laboratory are described in over 120 primary research papers, many of which are published in leading scientific journals. Dr. Iyengar’s research is supported via strong NIH grant funding, with her being the Principal Investigator of two consortia, the Family Investigation of Nephropathy and Diabetes Study, and the Fuchs’ Endothelial Corneal Dystrophy Multicenter Genetics Study. Dr. Iyengar is a mentor to several junior faculty at Case, and many of her former graduate students and post-doctoral fellows are now faculty with NIH funding. To summarize her career so far, she is a well established genetic epidemiologist, who has lead the fields of the genetics of vision, renal and speech-sound disorder at Case Western Reserve University and beyond.