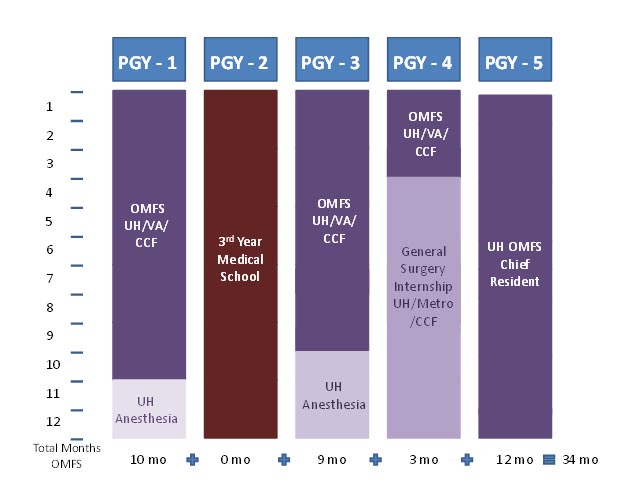 All incoming interns begin on OMFS service, either at University Hospitals, Veteran’s Affairs, or the Cleveland Clinic, under the tutelage of an upper-year resident. During this time the interns have the opportunity to learn from other residents as knowledge and procedures are handed down from faculty. Interns are expected to take calls at UH and, where applicable, the Veteran's Administration (VA) and the Cleveland Clinic (CCF). While on the VA rotation, the intern is the primary OMFS resident and he/she receives a very rich experience in dentoalveolar procedures, including implant placement. At CCF, the intern gains experience in managing in-hospital patients by working one-on-one with attendings. All three rotations will give the intern experience in diagnosis, information-gathering, dentoalveolar surgery, and major surgery within the scope of OMFS. While on the two-month anesthesia rotation, the resident will be paired with an anesthesiology resident or attending, learning and improving upon procedures involving management of the medically-compromised patient, airway management, pharmacologic management, intravenous sedation and general anesthesia.

Formal conferences are held to advance the residents in oral and maxillofacial pathology, contemporary issues in OMFS, orthognathics, implantology and anesthetic principles, case presentation, and OMFS knowledge updates. As well, interns are second year medical students and take part in a full-year course in physical diagnosis.

Residents will enter medical school as a third-year clerk and will, subsequently, rotate amongst the core clerkships, which include internal medicine, family medicine, obstetrics/gynecology, pediatrics, neurology, psychiatry, and surgery. Residents have a two month elective rotation when they may decide to work in a different medical specialty or a different hospital/city. During this time residents are not expected to take call on the OMFS service nor are they expected to attend OMFS conferences. As such, no resident's stipend is allotted and residents are responsible for their medical school tuition and living expenses.

The third-year resident returns to the OMFS service and will spend a total of six months at UH as the junior resident assisting the chief resident in major surgeries as well as advancing his/her skill in principles of sedation and dentoalveolar surgery. An additional two months are spent as the resident returns to the VA, performing dentoalveolar, trauma reconstruction, and implant placement procedures. One month is spent at CCF as the primary resident working closely with the attending on all major surgeries.

Three further months are spent on the anesthesia service at UH, where the resident is given additional responsibilities running anesthesia in a room directly under the supervision of an attending. One of these three months is spent performing pediatric anesthesia.

The third year resident is responsible for studying and passing the Step II USMLE during this year. Upon completion of this year, the residents are awarded the MD degree from the Case Western Reserve University School of Medicine.