New to the neighborhood 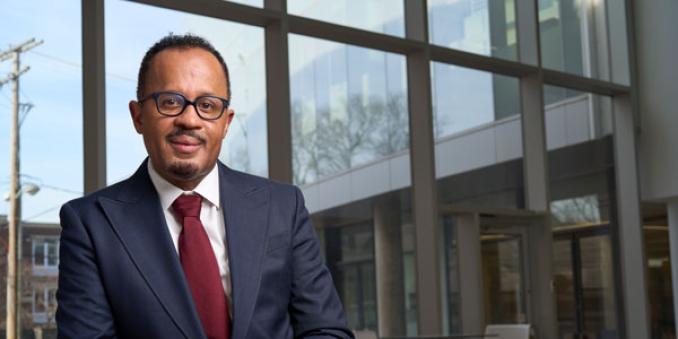 An accomplished scholar and a trailblazer in academia, the Mandel School’s new dean, Dexter Voisin, works to build consensus and bridges

With a last name that literally means “neighbor” in French, it’s of little surprise that fostering community is among Dexter Voisin’s highest priorities as dean of Case Western Reserve University’s Jack, Joseph and Morton Mandel School of Applied Social Sciences.

Immediately upon starting at the Mandel School in January, Voisin (pronounced vwah-zan) embarked on a listening tour, meeting with students, faculty, staff and alumni to talk about their passions and aspirations for the school.

And he has plenty more conversations—and, importantly, actions—planned.

“I use a metaphor of being at the airport and on the tarmac and building speed for takeoff,” Voisin, PhD, said about his first few months on the job. “It’s been intense, exhilarating, exhausting and very meaningful all at the same time.”

As a leader long known for both strengthening bonds and forging new paths, Voisin is focused on using those qualities to engage his colleagues.

A lifetime of “firsts”; a record of action

Throughout his life, Voisin has been a trailblazer. He was the first in his immediate family to migrate to the U.S. from Trinidad and Tobago, and the first among them to attend college (St. Andrews College) and graduate school (University of Michigan and Columbia University).

He was the first person of color to be promoted to full professor at the University of Chicago’s Crown Family School of Social Work Policy and Practice.

He was the first non-white dean appointed at the University of Toronto’s Factor-Inwentash Faculty of Social Work in 105 years—and the first Black dean at the university in 194 years—when he took the helm in 2019.

“I never stepped out with the goal of being the first. I entered these roles without knowing this history and was simply motivated by a desire to work hard and do my best,” he explained. “In hindsight, I now tend to frame these experiences as being a bridge builder. You need to have someone who steps out to pave a path forward for others.”

But for Voisin, it’s about more than just being first; it’s about being able to make real change. After two decades as a faculty member at University of Chicago, Voisin had grown restless, listening to people have the same conversations they’d been having for years about problems for which he saw solutions.

Taking the advice of trusted mentors, he decided to pursue a deanship. After his appointment at University of Toronto in 2019, Voisin quickly set out to attract more students of color to the school, engage the community, increase funding from a variety of sources and raise the school’s profile.

“The bottom line is I wanted to make change on a bigger institutional level,” Voisin said. “I wanted to move beyond talking about problems to actually working with others to collaboratively solve them.”

And he was successful.

In his nearly two-and-a-half years at University of Toronto, Voisin and his colleagues increased the international applicant pool by 300%, raised money for the school’s first indigenous endowed professorship, increased diversity among faculty and postdoctoral fellows by 44%, and elevated the profile of the school within the university, the community and the global stage. He served on a number of university-wide committees, including cochairing its Anti-Black Racism Task Force, and led the school through much of the COVID-19 pandemic.

“What really came across right from the beginning was his commitment to education, his strong sense of the importance of education of clinical social workers, his real commitment to research in social work and the value of the social work profession,” said Cheryl Regehr, PhD, provost of the University of Toronto.

This commitment to research is ingrained in him. Noted as one of the top 2% of most-cited researchers in any field, according to global data from Stanford University and Elsevier, Voisin has authored more than 170 articles in peer-reviewed journals. He still is active in research, focusing on racism, violence and health—and often shares his knowledge as a commentator for local, national and international news outlets. In 2019 Voisin authored a book, America the Beautiful and Violent: Black Youth and Neighborhood Trauma in Chicago (Columbia University Press).

Voisin has seen that same dedication to research at the Mandel School since he first gave a presentation on campus in 2019. He remembers being struck by the thoughtful questions he fielded—and the expansive, highly innovative research efforts faculty were leading.

“It was a truly exceptional visit,” Voisin remembered. “I was just blown away by the volume of applied work being done by this world-class faculty who care deeply for—and engage authentically with—communities.”

Three years later, now as dean, Voisin is keenly focused on elevating the work of the Mandel School’s researchers so their influence on government policy and impact on the world continue to grow.

“It was a truly exceptional visit. I was just blown away by the volume of applied work being done by this world-class faculty who care deeply for—and engage authentically with—communities.”

Case Western Reserve Provost Ben Vinson III called Voisin “a top-caliber intellectual” who will serve as an inspiration for the school—and beyond. And the provost feels confident Voisin can make the Mandel School—which is the top-ranked social work program in Ohio and No. 9 in the country, according to U.S. News & World Report’s recently released 2023 listing—even greater.

“I hope that he can lead our faculty to achieve their greatest heights and aspirations. I hope that he can build our student body into the finest anywhere,” Vinson said. “And I hope that he can make a positive impact on our city through his incredible energy and uncanny knowledge about the social issues that are fundamental to building a better, greater society.”

Vinson noted that Voisin has impeccable leadership and listening skills—sentiments echoed by those who have known him throughout his career.

Ralph DiClemente, PhD, chair of the Department of Social and Behavioral Sciences at the New York University School of Global Public Health, first met Voisin in 2000 when the Mandel School’s new dean was a doctoral student at Columbia University. DiClemente had given a presentation at the University of California, San Francisco, and Voisin approached him afterward, asking if they could work together. The young doctoral student explained that he thought he could learn a lot from DiClemente.

The conversation marked the start of decades of collaboration.

“He’s a great partner—thoughtful, insightful, congenial, collegial, collaborative, and I think one of his strengths is his ability to communicate ideas,” DiClemente said. “He brings out the best in people, and that includes me.”

Voisin’s students have been enriched by his mentorship, guidance and collaboration, DiClemente said, noting that the two-time dean has a genuine interest in promoting the careers of his students and helping them “catalyze their trajectories.”

Even those who were not his students have benefited from his guidance. In 2011, Jun Sung Hong, PhD, an associate professor in the School of Social Work at Wayne State University, was a doctoral student at the University of Illinois, Urbana-Champaign, when he met Voisin, then on the faculty at University of Chicago.

More than a decade later, the two continue to collaborate. Sung Hong said the dean goes out of his way to support doctoral students and junior faculty. “He’s encouraging and reasonable, yet has high standards,” recalled Sung Hong.

Lois Takahashi, PhD, director of the University of Southern California Price School of Public Policy in Sacramento, characterized Voisin, her research partner, as an “inspirational leader”—someone who can bring together people from across different disciplines to work and tackle a problem.

“He pushes us to be our best. He pushes me to be more than I thought was my best,” said Takahashi. “He’s the hardest-working person I know… really smart, very productive.

“He’s also somebody,” she said, “who wants to push the envelope.”

Listening for the future

Voisin has big ideas for the Mandel School. He wants to grow research and awareness of its local, national and global impact. He has plans to create more opportunities for students of color, and reduce the tuition burden for all students. He wants to challenge the social work profession as a whole to look internally, not just externally, to address racial inequities.

And he intends to build more bridges—within the school, across the university and in the community.

But it starts, first and foremost, with listening to his new neighbors. Voisin hopes to develop a plan through what he calls a “collective approach” that is “grounded in community.” He wants to know what has and hasn’t been tried in the school—and then build a shared vision based on what he hears.

“An incredible heart makes him an empathetic leader and keen listener,” Provost Vinson said of Dean Voisin. “He’s the right man for the right time.”