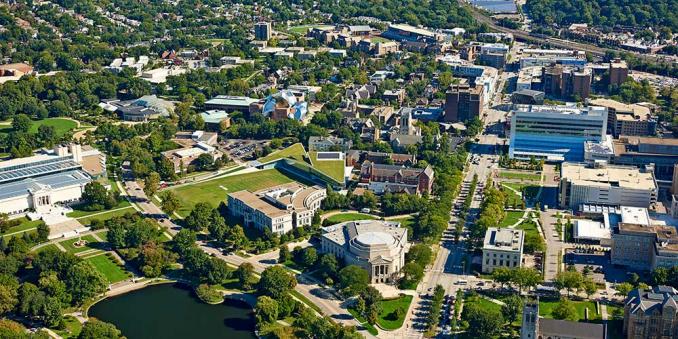 As Case Western Reserve charts the waters of its new reality, the North Star and Pathways of the Think Big strategic plan continue to guide the university. The university’s North Star states: Case Western Reserve is a high-impact research university that aspires to be a community where humanity, science and technology meet to create a just and thriving world. The Think Big Leadership Awards are meant to identify those who are helping to achieve this vision.

In mid-April, Provost Vinson asked the campus to identify teams or individuals who are pushing boundaries along each of four Pathways outlined in the university’s strategic plan. The campus community responded in force with nearly 100 individual and team nominations, representing more than 260 faculty, staff and students.

Winners were chosen by Think Big Pathway Leaders in conjunction with the Office of the Provost. They will be honored with an event at Harcourt House on October 5 hosted by incoming President Eric Kaler and Provost Vinson.

The Office of the Provost is pleased to announce the Mandel School winners of the 2021 Think Big Leadership Awards:

The National Initiative on Mixed-Income Communities team, which is achieving social impact in mixed-income communities, is actively forging meaningful partnerships and deploying impactful research far beyond campus. The initiative is currently engaged in community partnerships across the City of Cleveland, across the country and in Canada. Locally, in the Buckeye-Woodhill neighborhood, the initiative partnered with numerous community partners—including residents—to lead the application process for $35 million in funding. The redevelopment of the Woodhill Homes, which is less than two miles from CWRU, will bring about significant social and economic impact. In the Slavic Village neighborhood, the team is galvanizing a partnership to design and implement a pioneering community-network building strategy with a racial equity focus.

Adrianne Fletcher is the assistant dean of diversity and inclusion in the Jack, Joseph and Morton Mandel School of Applied Social Sciences and a member of the Minority Affairs Faculty Senate Committee. She has organized university-wide events regarding diversity and discrimination this year, always makes major contributions to the minority affairs committee and researches implicit bias. She is approachable and always willing to help and is the change agent that we all want to be. She educates others on the impact of microaggressions and overt discrimination and finds ways to reduce it on our campus and in the community.

Learn more about the other Think Big Leadership Award winners.