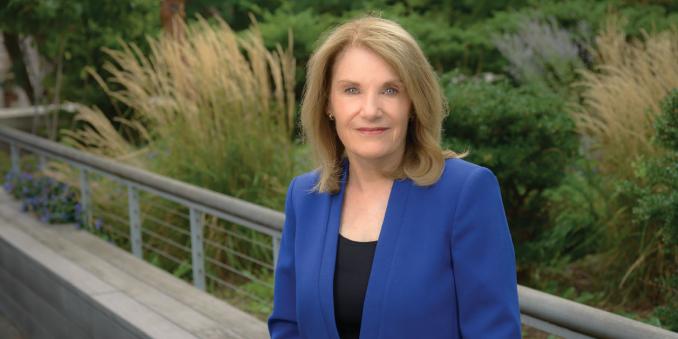 Make a gift in honor of Claudia J. Coulton

Dean Dexter R. Voisin and our school community honored Claudia J. Coulton on the occasion of her retirement from teaching and celebrated her illustrious 44-year academic career at the Mandel School on Thursday, Sept. 1 in Noble Commons. Her substantial worldwide impact through the early development of various data collection models now essential to community change initiatives, research, social policy and practice was also recognized.

When Claudia J. Coulton, PhD (GRS ’78, social welfare), delivered a major presentation on the potential impacts of welfare reform in Cleveland in 1996, she came prepared with four overhead projector transparencies—and a wealth of knowledge gleaned from data-driven studies.

Facing a room of politicians, reporters, human-services professionals and volunteers for the Federation for Community Planning seminar, she overlaid transparencies of maps and data points to display the spatial mismatch between where poor Clevelanders—especially those who are Black—live, and where jobs are located. In turn, she identified the barriers that kept poor individuals in those neighborhoods.

More than 25 years later, what Coulton demonstrated is now commonly known as systemic racism. And though it took time for the term to come into the national lexicon, this presentation, among many others Coulton has given across her career, brought to light the myriad, deep-rooted issues facing poor Americans.

Coulton started her PhD in social welfare at Case Western Reserve in the mid-1970s, fueled by an overwhelming desire to fix both the injustices rampant in society and the underuse of data in social work.

Within six years of earning her doctorate, she became a full professor. Four years later, she launched the Center on Urban Poverty and Community Development—an organization that today harnesses big data to help reduce lead paint risks, raise awareness of child maltreatment, and influence social policy and practice around the globe. This spring, she retires from the university, but will continue to serve the center as a consultant.

“Professor Claudia Coulton is a national and international luminary in social work, social welfare and beyond,” said Dexter Voisin, PhD, the Jack, Joseph and Morton Mandel Dean in Applied Social Sciences. “She has set the standard for what many scholars hope to achieve during their careers, and the impact of her scholarship will leave an enduring professional legacy.”

In her early career, Coulton’s passion for “crunching numbers” led to positions on the National Association of Social Workers’ team developing national quality assurance parameters for use in healthcare and on a six-city, data-driven Rockefeller Foundation study examining persistent urban poverty—a project that spurred the launch of the Mandel School’s Poverty Center in 1988.

Coulton’s more than 200 peer-reviewed articles, book chapters, papers and reports—on everything from lead poisoning to the foreclosure crisis—place her among the top 2% of most-cited academic researchers in any field, according to a Stanford University/Elsevier global list. Her accomplishments in her field and at Case Western Reserve, including chairing the Mandel School’s doctoral program and helping guide curriculum transformations, earned her the university’s highest honor: Distinguished University Professor. She was among the first six people nominated to the American Academy of Social Work and Social Welfare. And, in 2019, the National Association of Social Workers named Coulton a “Social Work Pioneer.”

“Some people call what we do at the Poverty Center ‘bringing truth to power,’” Coulton said. “Throughout my career, that’s what I’ve tried—and will continue to try— to do: use technology, data and visualizations to move the needle on the thinking and make a real impact in our communities.”

Claudia Coulton will retire at end of 2021–22 academic year

Dr. Coulton joined Case Western Reserve University as an assistant professor in 1978 and has since distinguished herself as an important contributor and asset to the university community, the Mandel School, Cleveland and the academic world.

She has authored numerous peer-reviewed publications in high-impact journals and has generated significant research findings that have informed policy. She has also been recognized as one of the top 100 most-cited social work scholars in the nation and is among the top two percent of most-cited scientists globally. She was inducted as a Fellow of the American Academy of Social Work and Social Welfare (AASWSW) in 2009, a Fellow of the Society for Social Work and Research (SSWR) in 2017, and was named a Social Work Pioneer by the National Association of Social Workers (NASW) in 2019.

In 1988, Dr. Coulton received grants from the Rockefeller Foundation and Cleveland Foundation to conduct research into community conditions that would inform civic responses to improve people's lives in distressed neighborhoods. These early efforts gave rise to the Center on Urban Poverty and Community Development, and her as the founding director. Nationally and internationally, she is considered a preeminent scholar in neighborhood research and in using integrated data to inform policy.

At the Mandel School, Dr. Coulton has chaired and served on all of the major committees involving school governance and curriculum. She has also been involved in mentoring numerous doctoral students and junior faculty across the academy. Most recently, she chaired the hiring committee that led to the appointment of Dexter Voisin as dean.

“The significant mark and legacy that Dr. Coulton established at the Mandel School has set a high standard that academics strive for during their tenure in the academy,” said Dean Voisin. “And, it is one that only a few achieve."

A series of events are being planned to honor Dr. Coulton. The spring edition of action magazine includes a tribute to her, and a lecture will take place during the Fall 2022 semester to recognize her. Additionally, a special annual fund has been created in her honor to support students studying Community Practice for Social Change. You may also send your well wishes via the virtual kudos board submission form.

Dr. Coulton will remain involved with the Poverty Center as a consultant and advisor during the next academic year.

Please join us in celebrating and thanking Dr. Coulton for her long-term service, dedication and excellence to the Mandel School and academic community.

Give tribute by making a gift in honor of Dr. Coulton