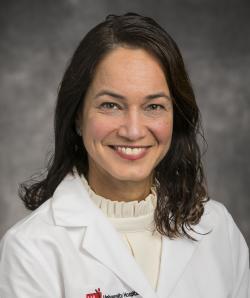 Dr. Bruno attended Federal University of Ceara in Brazil and completed her Internal Medicine training at Albert Einstein Medical Center in Philadelphia. This was followed by a fellowship in Hematology and Medical Oncology at Thomas Jefferson University Hospital, also in Philadelphia. After working in rural Nebraska for three years, where she was able to help and establish a multi-disciplinary clinic for Thoracic Oncology patients, she went on to pursue her Master's in Cancer Biology at Graduate School for Biomedical Sciences at University of Houston/MD Anderson Cancer Center.

Dr. Bruno's research is focused on the clinical management of patients with lung cancer and other thoracic malignancies, such as malignant mesothelioma and thymomas.

While lung cancer incidence and mortality has declined over the past two decades due to efforts in combating tobacco exposure and developing tests to screen for lung cancer in people who are at high risk to develop this disease, much still needs to be accomplished. Lung cancer is still the leading cause of cancer-related deaths in the US and worldwide. Unfortunately, less than 20% of all patients are alive after five years following a diagnosis of lung cancer. Many new developments have changed the paradigm of treatment of both early and advanced lung cancer, improving the survival and cure rates of many of the affected individuals. Due to tireless research efforts and willingness of patients to enroll in clinical trials, metastatic lung cancer is now a disease that can be treated with what is called “targeted therapies,” which block the activation of certain proteins that are encoded by specific mutated genes such as EGFR and ALK, which account for a fraction of all lung cancers. Such therapies are better tolerated than chemotherapy and have higher chances of working. Also, now many patients receive immunotherapy upfront for the treatment of this condition, with some of them going on to achieve very prolonged responses, with minimal - if any - side effects.

Dr. Bruno focuses on developing and implementing clinical trials for patients with thoracic malignancies that will ultimately and hopefully lead to the discovery of newer agents with better clinical efficacy and less toxicity.