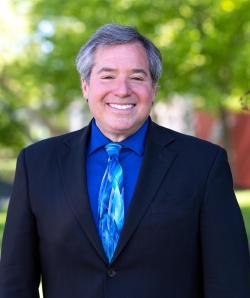 Michael Scharf has been Co-Dean of Case Western Reserve University School of Law since 2013. He is also the Joseph C. Hostetler—BakerHostetler Professor of Law and serves as Managing Director of the Public International Law & Policy Group, a Nobel Peace Prize-nominated NGO.

In 2004, Scharf trained the judges for the trial of Saddam Hussein and during a sabbatical in 2008, he served as Special Assistant to the Prosecutor of the Cambodia Genocide Tribunal.  In February 2022, Scharf presented an Amicus Argument before the Appeals Chamber of the International Criminal Court in The Hague on the question of who has the burden of proof on the insanity defense in a case involving a former child soldier.

Scharf is the author of 20 books, five of which have won national book of the year honors. A recipient of the Case Western Reserve University School of Law Alumni Association's "Distinguished Teacher Award" and Ohio Magazine's "Excellence in Education Award," Scharf continues to teach International Law and was ranked as among the most cited authors in the field since 2010 by the Sisk/Leiter study.

Since 2011, Scharf has been the producer and host of "Talking Foreign Policy," a radio program broadcast on Cleveland’s NPR station and other NPR affiliates across the country, which is also available as a podcast. In 2019 Scharf was selected for life membership in the Council on Foreign Relations, in 2020 he was elected President of the American Branch of the International Law Association, and in 2021 he was elected to the Executive Council of the American Society of International Law.