During the 2020-21 academic year, the Inamori Center provided space for conversations on a topic of consequence: JUSTICE. We were able to draw on the insight and expertise of Inamori Ethics Prize winners as well as top scholars and practitioners in a thematic series of events and programming addressing the topic of JUSTICE from multiple perspectives, locally and globally.

The Conversations on JUSTICE series includes 12 different conversations and culminates with the presentation of the 2020 Inamori Ethics Prize to Judge Silvia Fernández de Gurmendi and a series of on-campus and online prize events on September 23 and 24, 2021.

Conversations on JUSTICE with Inamori Ethics Prize Winners and Colleagues

This event series includes discussions with prize recipients and their esteemed organizational colleagues, as well as Northeast Ohio and Cleveland community experts and scholars to offer perspective on topics locally and globally. These events are always available to the general public. 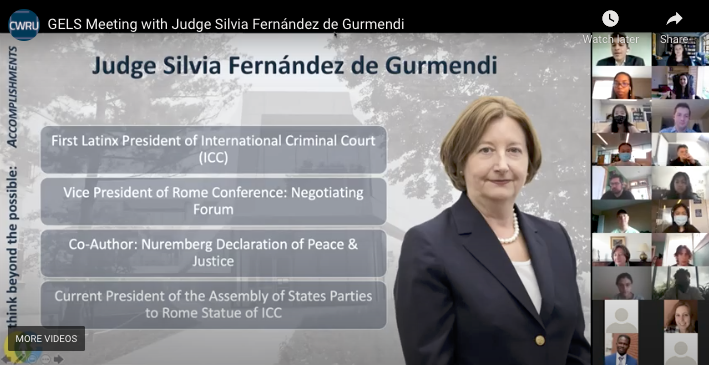 The Conversations on JUSTICE with Inamori Ethics Prize Winners and Colleagues event series was selected as a CWRU NorthStar experience by the Office of the Provost. CWRU students who attend one of these two events (or watch the video recording) and submit a creative response to the Inamori Center in the form of: a short essay, a poem, a song, a video, or other reflection will be eligible for a certificate of recognition and may also enter a contest with prizes through the Inamori Center.

This event series includes other programming in Inamori Center focus areas that will also be considered through the lens of JUSTICE. These events are always available to the CWRU campus community, and for some events, the general public.

During the 2020-21 academic year, other programming in Inamori Center will also be considered through the lens of JUSTICE. These events are always available to the CWRU campus community, and for some events, the general public. We aim to provide programming and speakers with an interdisciplinary impact that will be of interest to multiple audiences. Our currently scheduled programming includes:

David Livingstone Smith, University of New England professor and Anisfield-Wolf Book Award winner, provided an online lecture and discussion on September 30, 2020. Livingstone Smith introduced new scholarship on the phenomenon of dehumanization and lesser-known episodes of violence from history and current events and the dynamic between racism and dehumanization in his new book On Inhumanity: Dehumanization and How to Resist It. This event was available to the general public as part of Cleveland Book Week and held in collaboration with the Anisfield-Wolf Book Awards. Learn more and watch the event here.

Reuben E. Brigety II - February 16, 2021Reuben E. Brigety II, the 17th vice-chancellor and president of the University of the South and former U.S. ambassador to the African Union spoke on “Overcoming American Tribalism: Healing America through Common Purpose” on February 16, 2021, which featured a robust conversation on how universities, society, and private citizens can better lead during these fractured times and develop a stronger sense of constructive civic habits. This session was moderated by Provost and Executive Vice President Ben Vinson III and the Johan Verheij Memorial Professor of Law Jonathan H. Adler. This event was sponsored by Cuyahoga County Public Library.

Pauline Shanks Kaurin, the Navy War College’s Stockdale Professor in Ethics, discussed her new book On Obedience: Contrasting Philosophies for the Military, Citizenry, and Community in collaboration with the Inamori Center and the Baker-Nord Center for the Humanities on March 26, 2021 - 12:45-2:00pm EST. Shanks Kaurin introduced new scholarship that draws from a variety of disciplines including classical studies, philosophy, history, international relations, literature, and military studies, to explore the ethics of obedience.

Jonathan Holloway - April 7, 2021On Wednesday, April 7 from noon to 1 p.m., the Office of the Provost will host the fourth installment in the North Star Seminar series. The event will feature Dr. Jonathan Holloway, a U.S. historian, and 21st president of Rutgers, The State University of New Jersey.  Dr. Holloway's talk is titled "Framing a Better Civic Dialogue in an Age of Racial Reckoning: Universities, the Public, and You." The talk will address issues like healing divides and elevating the state of civic dialogue in America. Dr. Holloway will speak from his new book, The Cause of Freedom: A Concise History of African Americans, which asks, "What does it mean to be an American?" This session will be moderated by Provost and Executive Vice President Ben Vinson III and Professor of Law Andrew S. Pollis, JD.

M.R. Sauter, assistant professor at the University of Maryland College of Information Studies, will participate in a live-streamed discussion on smart cities on April 9, 2021 12:45-2:00pm EST in collaboration with the Inamori Center and the Baker-Nord Center for the Humanities. The talk, Chasing Something Beautiful: What A Smart City Promises, What a City Can Do, examines the cultural, economic, and sociotechnical implications of the project Sidewalk proposed and the local and global reactions it received, and argues that the Sidewalk sales pitch exploited Canadian economic anxieties and echoes previous waves of corporate-colonial expansion in Canadian history, while replicating the dependent branch plant economic models that the innovation economy model was thought to depart from, with implications for the stability and security of residents and the civil sphere of Toronto

The Classroom, The Boardroom, Every Room: Asian and AAPI Experiences at CWRU and Beyond: a panel featuring Case Western Reserve University Asian and AAPI alumni, staff, and student discussing their experiences, including:

This event was hosted by the Office for Inclusion, Diversity and Equal Opportunity, Center for International Affairs and Inamori International Center for Ethics and Excellence as part of CWRU's celebration of Asian, Pacific Islander, Desi & Asian American Heritage Month.

On Friday, May 21 at 12 noon, the Office of the Provost will host the fifth installment in the North Star Seminar series. The event with feature Saint Paul, Minnesota Mayor Melvin Carter and Macalester College President Dr. Suzanne Rivera. The pair will focus on lessons for restoring and reframing civic dialogue in the aftermath of racial shock in Minnesota. This session will be moderated by Case Western Reserve University Provost and Executive Vice President Ben Vinson III and Inamori Professor in Ethics Shannon E. French. Vice President for the Office for Inclusion, Diversity and Equal Opportunity Robert L. Solomon will provide a welcome.

JOIN US - on campus or online! 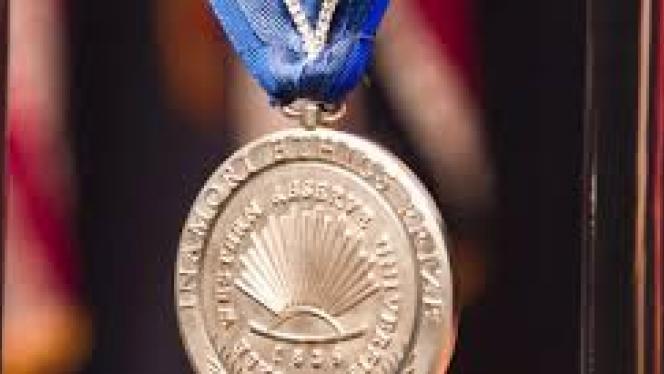 The Inamori Ethics Prize ceremony and symposium for our 2020 winner, Judge Silvia Fernández de Gurmendi, will be held on campus of Case Western Reserve University on September 23 and 24, 2021.

Read the press release regarding the postponement of the 2020 Inamori Ethics Prize ceremony and the introduction of the Conversations on JUSTICE series.