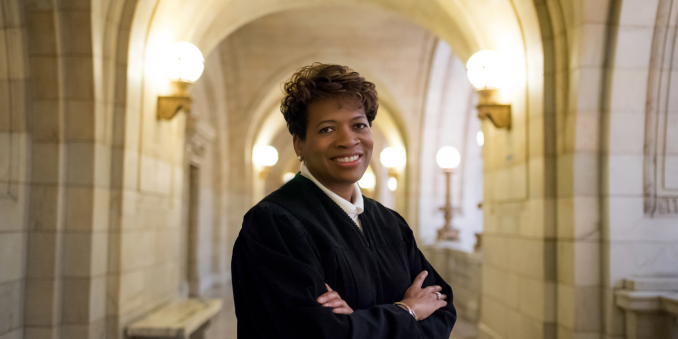 The Mandel School is pleased to announce Honorable Melody J. Stewart (PhD '08; JD), Justice of the Supreme Court of Ohio, as its 2022 Diploma Ceremony speaker.

Melody Stewart was elected in November 2018 to a full term as the 161st Justice to serve on the Supreme Court of Ohio. Prior to joining the Supreme Court, Justice Stewart served on the Eighth District Court of Appeals—elected to an unexpired term in 2006 and twice re-elected to full terms. She served as the court’s Administrative Judge in 2013.

Justice Stewart has more than 30 years of combined administrative, legal and academic experience. She was an administrator for a healthcare management company, a music teacher, a civil defense litigator and a law school administrator and professor before being elected to the Court of Appeals. While on the Eighth District Court of Appeals, Justice Stewart was assigned to hear cases in other appellate districts and in the Ohio Supreme Court.

After practicing law as an assistant law director for the cities of Cleveland and East Cleveland, Justice Stewart worked as a lecturer, an adjunct instructor and an assistant dean at Cleveland-Marshall before joining the full-time faculty. Additionally, she taught at the University of Toledo College of Law and at Ursuline College, and was director of student services at Case Western Reserve University’s School of Law.

Justice Stewart has served on many boards and committees, including the Ohio Criminal Justice Recodification Committee, the Ohio Supreme Court’s Judicial College board, was chair of the Ohio Capital Case Attorney Fee Council, and served as a commissioner and chair of the Board of Planning and Zoning for the city of Euclid. She has been a member of various professional, educational, civic and community organizations.

Justice Stewart is admitted to practice in the state and federal courts in Ohio, the District of Columbia Court of Appeals and the United States Supreme Court.

Of historical note: Justice Stewart is the first African-American woman elected to the Ohio Supreme Court.