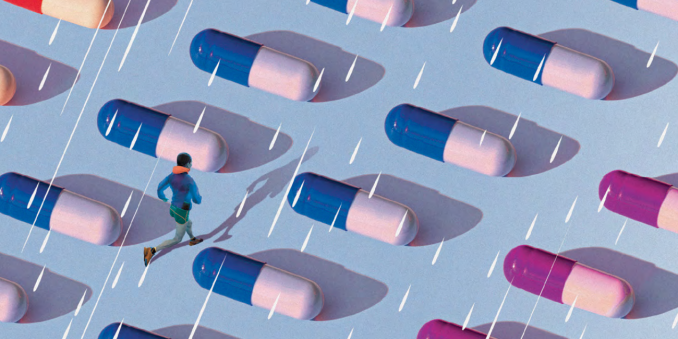 While much of the world focuses on COVID-19, an epidemic surges in Cleveland and beyond—and Mandel School faculty, staff and alumni are there to respond

Last fall, the Cuyahoga County Medical Examiner issued two public health alerts unrelated to the COVID-19 pandemic: The first came when 12 people in the northeast Ohio county died of opioid overdoses in two days, and the second when eight died in a single day of the same cause.

By the end of 2021, drug overdose deaths in the county, which has consistently seen among the worst overdose fatality rates in the state and the U.S., surged to near record-breaking highs—approximately 700 in total. The numbers surpassed 2017’s statistics, which previously marked the worst year in the county’s history.

But this time, carfentanil—a synthetic opioid used as an elephant tranquilizer that is 100 times more potent than fentanyl—was not the culprit as it was in 2017. Instead, it was fentanyl, which is cheaper to produce in smaller quantities, leading to higher profits for traffickers, according to Ryan McMaster, research data manager at the Begun Center for Violence Prevention Research and Education at Case Western Reserve University’s Jack, Joseph and Morton Mandel School of Applied Social Sciences.

“Ohio has a very large population and drugs are easily accessible in Cuyahoga County,” said McMaster. “Synthetics like fentanyl are cheap, and their use is on the rise here because there’s a market for them.”

Illegal fentanyl is typically made in labs in other countries and smuggled into the United States through Mexico, said Daniel Flannery, PhD, the Semi J. and Ruth W. Begun Professor at the Mandel School. Traffickers and dealers mix fentanyl in with other drugs—such as cocaine and methamphetamines—to increase potency and profit.

“Synthetics like fentanyl are cheap, and their use is on the rise here because there’s a market for them.”
– Ryan McMaster

“There are pills and cocaine that have fentanyl in them, and people aren’t always aware of it,” said Flannery, who is also the director of the Begun Center. Because just two milligrams of fentanyl can be lethal, highly potent fentanyl and users—unwitting and otherwise—make for a deadly combination.

“It makes you wonder what’s going on in substance use in general,” said McMaster. “It seems like there’s a new wave.”

And that wave is being brought to shore by an overwhelming demand for deadly synthetic drugs—in the midst of another lingering public health crisis.

The Centers for Disease Control and Prevention published a report last year calling the convergence of the COVID-19 pandemic and the opioid crisis “a perfect storm” that pushed drug overdose deaths to record-breaking levels across the country: more than 100,000 in a single year.

When the first stay-at-home order was issued in March of 2020 to slow the spread of COVID-19, Monika Trgovich (SAS ’21) was the director of recovery housing at Y-Haven, the YMCA of Greater Cleveland’s homeless shelter and drug abuse and addiction treatment center.

“There was no handbook on how to help somebody in recovery during a pandemic,” she said. “COVID has changed how we operate in the world, and it’s had a negative impact on people in recovery.”

The isolation that kept so many people safe during the pandemic crippled recovery efforts for those struggling with addiction, as meetings were canceled, held virtually or avoided by those worried about catching COVID-19, Trgovich explained. Fewer people were coming in for the in-person meetings that are crucial for those in recovery, as they connect people with “a common goal,” she said.

When people lost their jobs or their homes, stimulus checks distributed through the Coronavirus Aid, Relief and Economic Security Act were a lifeline for many Americans. But for people struggling with substance abuse disorders, it sometimes became just the opposite.

In fact, a recent study published in the April issue of the International Journal of Drug Policy shows that overdose deaths spiked in the weeks after stimulus checks were mailed. Referred to as the “check effect,” an unintended consequence of these economic payments was that those with substance abuse disorders were thrown back into their cycle of abusing drugs—in an even more isolated world.

Approximately two-thirds of those who died from overdoses in 2021 had more than one drug in their systems.
— Cuyahoga County Board of Health data

“The checks were a huge trigger for our clients,” said Trgovich. “And even though we talked with them about how to manage these checks, we’d lose clients after the checks were sent out. We knew they were using again.”

One might expect that, as the pandemic wanes and people return to more socially connected life, drug overdoses will decrease. But Flannery and Begun Center researchers recently conducted a study— published last fall in Police Chief, the International Association of Chiefs of Police magazine—that predicted another wave in opioid overdose deaths. That prediction appears to be playing out in reality.

During the pandemic shutdown, as Trgovich pointed out, many people who use or abuse opioids stopped their treatment and were socially isolated, making them more inclined to begin using again. Then, in May and June of 2020, COVID lockdowns lifted, and overdose deaths spiked. Though the reasoning for the drastic increase can’t be pinpointed to a single cause, Flannery fears the data indicates a repeat could be in store as restrictions everywhere are lifted.

“Unfortunately, 2022 is probably going to look a lot like 2021,” said Flannery. “But knowledge is power here. The more data and information we have, the better we can empower different players to do their jobs and save lives.”

“Knowledge is power here. The more data and information we have, the better we can empower different players to do their jobs and save lives.”
– Dan Flannery, PhD

One such player: April Vince (SAS ’98), grant program manager for the Overdose Data to Action Initiative at the Cuyahoga County Board of Health. Three years ago, the Centers for Disease Control and Prevention awarded Ohio $4.4 million annually to address the opioid epidemic, and the Cuyahoga County Board of Health disseminates that funding to organizations battling the crisis throughout the area. With a careful eye on data and results collected by the Begun Center’s team, Vince oversees the work of these subgrantees, looking for ways to improve or customize their work around the needs of each community.

“We are not going to have an easy year ahead if the drug seizures are any indication,” she said. The Drug Enforcement Agency called 2021 drug seizures in northeast Ohio “record-shattering,” noting a 400% increase in methamphetamines and fentanyl pills designed to look like prescription painkillers. Yet despite the startling amount of drug seizures in 2021, supply on the streets of Cuyahoga County remains alarmingly high, according to McMaster.

Another source of critical data Vince references is the Overdose Data Dashboard on the Cuyahoga County Board of Health’s website—a resource McMaster developed in partnership with the Cuyahoga County Board of Health’s surveillance team. The dashboard shares timely, high-quality, comprehensive data on drug overdoses throughout the county, including deaths, naloxone administrations, emergency department visits and drug lab testing, in an effort to help the public understand the drug overdose epidemic, as well as inform prevention and response efforts.

“Data drives programming,” said Vince. “You need to analyze the data and be very methodical and purposeful so that you know when you put programming in place, you’re not just playing whack-a-mole.”

But, as the name of Vince’s grant program makes clear, that data must be put into action.

“We’re not just sitting around collecting data,” said Flannery. “We’re embedded with our partners in the community. And it’s not just us—all of these partners are working together here.” That includes law enforcement, the medical examiner, social workers, government agencies, hospitals, researchers, nonprofit organizations and the intelligence community.

And, working together, they’ve made significant progress.

“We need to make it easier to access services. We have to figure out ways to get clients into treatment sooner.”
– Monika Trgovich (SAS ’21)

Naloxone kits—which can reverse the effects of an overdose—are more accessible than they used to be. These and fentanyl testing strips—which allow users to identify the presence of fentanyl in their drugs—have been placed in high-risk communities at hotels, restaurants, bars and gas stations.

Thanks to the Overdose Data to Action Initiative, first responders and law enforcement officers now receive trauma-informed training on substance abuse, administering the naloxone they more regularly carry and treating an overdose scene.

Quick Response Teams—housed at the Office of Opioid Safety in Cleveland’s MetroHealth hospital system—snap into action every Monday when they receive a weekly report of every non-lethal overdose that has occurred in Cleveland over the past week. A social worker and a plainclothes police officer knock on each door on the list in an effort to guide the individual to treatment.

But treatment for substance abuse disorders is just as complex as the crisis itself. “It is not one size fits all,” Flannery explained, “nor is it equally accessible.” Medically underserved populations have less access to healthcare, insurance coverage and treatment. And COVID-19 has kept people from seeking treatment as they avoid congregate settings.

“We need to make it easier to access services,” said Trgovich. “We have to figure out ways to get clients into treatment sooner.”

The stigma associated with substance use and abuse continues to keep many people from seeking help. “We need to destigmatize addiction and drug use so we can talk about it more, so people won’t be scared to come forward for treatment,” said Vince.

For her, education and changing perceptions about substance abuse disorder is a personal priority. “I don’t know one person who hasn’t been touched by this epidemic,” Vince said. “Addiction may be a choice the first time someone uses, but it’s a disease once they’re addicted. And every life is worth saving.”

Trgovich agrees that education is still the key to undoing the crisis. She recently accepted a position as director of recovery services for Aware Recovery Care, which provides treatment to people in the privacy of their own homes—a different and, she hopes, more effective approach.

“Addiction may be a choice the first time someone uses, but it’s a disease once they’re addicted. And every life is worth saving.”
– April Vince (SAS ’98)

Now that the Overdose Data Dashboard is up and running, McMaster has moved on to analyzing overdose deaths in relation to social determinants of health in an attempt to identify new risk factors. Not surprisingly, he’s already beginning to see a connection between death rates and poverty.

“I feel like we’ve been tackling this for a long time,” McMaster said. “We’re talking about this like it’s just an issue, but it’s taking people’s lives. We have to start sharing information to spread the story, otherwise it’s going to continue to go on at this rate.”

The key, Flannery noted, is education and awareness of the crisis and its potential solutions— including research-supported recommendations for law enforcement, hospitals, policy makers and social workers.

“We all have a role to play to address these complicated issues in a way that can affect change over time,” he said. “We can’t do it alone.”