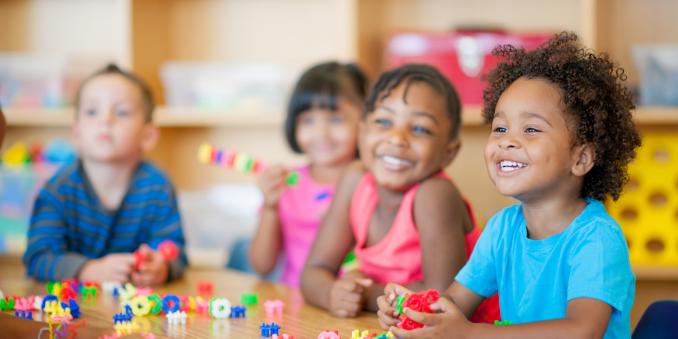 Children who participate in high-quality “universal pre-kindergarten” (UPK) programs are better off—both academically and socially—than their peers who attend other top-ranked programs in Cuyahoga County, according to a new Case Western Reserve University study.

The study tracked hundreds of students in 12 public school districts in Cleveland and its inner-ring suburbs that use UPK and its high-standard curriculum designed to prepare students for kindergarten. The goal: to evaluate the effects on kindergarten readiness and third-grade reading proficiency—something that hadn’t been studied before.

“This is our most conclusive work on this topic,” said Rob Fischer, an associate professor at the university’s Jack, Joseph and Morton Mandel School of Applied Social Sciences and co-director of the Center on Urban Poverty and Community Development.

“We did this study to examine kindergarten readiness,” he said. “We found that there were not only gains, but substantial gains for those children who participated in UPK. Simply put, these students were more ready than their peers when they arrived at kindergarten.”

Researchers said the study is significant because it provides some metrics showing the program works.

Researchers compared results of children in local schools who participated in UPK with thousands of children who attended high-quality non-UPK preschool programs—those rated 3 to 5 stars on the state’s SUTQ rating system. Administrative records housed in the CHILD System were used to select study groups. The idea was to match children from the same backgrounds—age, gender, race, maternal education level, socioeconomic status and neighborhood disadvantage—for an accurate snapshot.

The study, done in coordination with Cuyahoga County’s Invest in Children, found that:

“Experiences in early childhood—both positive and negative—are vitally important to predict wellbeing later in life, but research into this topic has been limited by the absence of solid data,” said Elizabeth Anthony, research assistant professor at the Mandel School. “This study builds on earlier evaluations of UPK, but is the first rigorous assessment of the program’s impact on young children, with the data to support it.”

Cuyahoga County’s Invest In Children agency launched its multi-million-dollar UPK program in 2007 with input from national experts on its design, evaluation and financing,

The initiative got a boost in 2016, when Cuyahoga County Executive Armond Budish and County Council approved a $10 million expansion. Private investors kicked in an additional $12 million; the program doubled the number of UPK seats from 2,000 to 4,000 through this year.

“We recognize that this is working,” said Rebekah Dorman, director of the county’s Invest In Children initiative. “With the passage of the HHS levy, we will be able to maintain at our level of commitment. For us, early childhood education is an important value—really, a priority.”