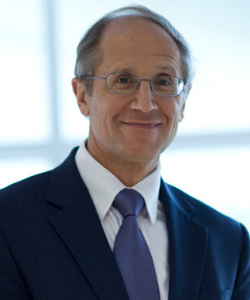 A renowned physician and cancer researcher, Stanton Gerson, MD, is dean for Case Western Reserve University (CWRU) School of Medicine and senior vice president for medical affairs. In addition to the School of Medicine faculty and staff, he has oversight of all appointed faculty who are located at University Hospitals Cleveland Medical Center, Cleveland Clinic, MetroHealth System and Veterans Affairs Northeast Ohio Healthcare System.

Along with his role as dean, he serves as Acting Director of the NCI designated Case Comprehensive Cancer Center (Case CCC) and Director of the National Center for Regenerative Medicine. He is the Asa and Patricia Shiverick—Jane Shiverick (Tripp) Professor of Hematological Oncology and Case Western Reserve University Distinguished University Professor (Class of 2013.) In 2012, he was the recipient of the Case Western Reserve Medal for Excellence in Health Science Innovation, the highest honor bestowed by the School of Medicine to those advancing research, education and healthcare.