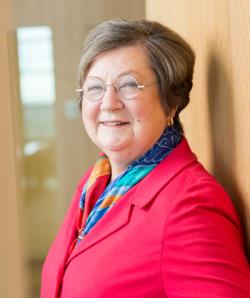 A renowned physician and medical researcher, Pamela B. Davis, MD, PhD, became dean of the School of Medicine in 2007 after serving as interim dean during the previous year. In addition, she is senior vice president for medical affairs at Case Western Reserve University and holds the Arline H. and Curtis F. Garvin Research Professorship. A professor of pediatrics, physiology and biophysics and a professor of molecular biology and microbiology at the university, she previously served as chief of the pediatric pulmonary division at Rainbow Babies and Childrens' Hospital and as director of the Willard A. Bernbaum Cystic Fibrosis Research Center at Case Western Reserve University.

As dean of one of the top medical schools in the nation, Dean Davis is committed to excellence in medical education, biomedical research and clinical care. The school has formal relationships with the Cleveland Clinic, University Hospitals, Louis Stokes VA Medical Center and MetroHealth, the region’s leading public hospital.

With these and other respected collaborating institutions, Dean Davis is working to improve the school's national and international stature as a research-intensive medical school. Her three main goals are (1) excellence in health science and health professional education, based on the innovative Western Reserve2 curriculum and the curriculum of the Cleveland Clinic Lerner College of Medicine, a track within the school’s education program; (2) advancing discoveries from our laboratories to the patients; and (3) improving the health of our community.

In 2014, Dean Davis, a prolific researcher whose work focuses largely on cystic fibrosis, was proud to be inducted into the Institute of Medicine, now known as the National Academy of Medicine. She was also elected as the 2015 Chair of the Medical Sciences Section of the American Association for the Advancement of Science. For more than 30 years, Dean Davis has been continuously funded by the NIH, most recently as the principal investigator of the school’s $64.6 million Clinical and Translational Science Award (CTSA) program. In 2015, she began serving as the program’s co-principal investigator.

In 2013, the university announced a landmark partnership with the Cleveland Clinic to create a state-of-the-art health education campus. The shared space will house students from the medical school’s two tracks, the university program and the Cleveland Clinic Lerner College of Medicine, as well as from the Frances Payne Bolton School of Nursing and the School of Dental Medicine.

Additionally, Dean Davis holds seven U.S. patents and is a founding scientist of Copernicus Therapeutics Inc., a biotechnology company that creates novel pharmaceutical targeting and delivery systems. She has published more than 130 articles in peer-reviewed journals. She has served in prominent roles such as the Advisory Council to the National Institute of Diabetes and Digestive and Kidney Diseases, the Board of Scientific Counselors for the National Heart, Lung and Blood Institute and the Advisory Council for National Center for Advancing Translational Sciences.

Dean Davis has been a recipient of the Paul Di Sant’Agnese Award from the Cystic Fibrosis Foundation, the Rosenthal Prize for academic pediatrics, the Smith College Medal, and has regularly been named in "Best Doctors in America" and "Top Doctors." In 2014, Dean Davis was locally recognized as a Crain’s Cleveland Business “Woman of Note.” She also has been elected to the Association of American Physicians and inducted into both the Cleveland Medical Hall of Fame and the Ohio Women’s Hall of Fame.

To contact the Dean or Dean's Office, please call or email