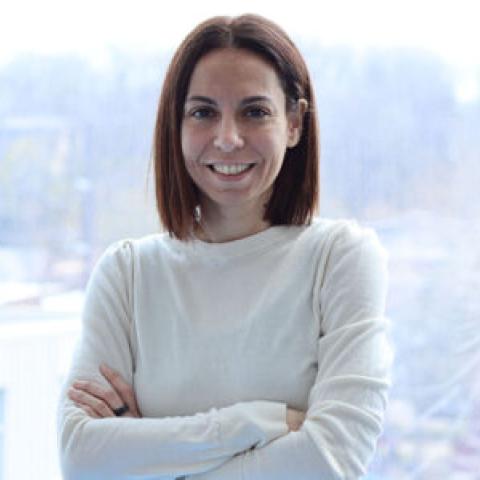 “My advisor, Simon Halegoua, showed me how to use the wonder of science to encourage and motivate trainees,” she said. “Every time I would show him new data, he’d excitedly say: ‘You are the only person in the world who knows this right now!’”

It’s a lesson that’s come full circle as Philippidou now aspires to instill this same sense of curiosity in the graduate students in her Case Western Reserve University School of Medicine lab, which focuses on the development of respiratory circuits and could have implications for potential therapeutic treatments for diseases such as amyotrophic lateral sclerosis, or ALS.

Now, Philippidou’s mentoring approach has earned university recognition: The assistant professor in the Department of Neurosciences was chosen for a 2022 John S. Diekhoff Award for Distinguished Graduate Teaching and will receive the award during the university’s commencement ceremonies Sunday, May 15.

Philippidou’s motto is that there’s no one-size-fits-all approach to mentoring; it’s based on a teaching philosophy of accessibility, clear communication and empathy.

Her impact is evident in words of praise from her students. “I am immensely grateful that I joined the Philippidou lab, and I am a better scientist for it,” wrote one student nominator.

“It is not uncommon for me, struggling to sleep due to some experimental issue that came up during the day, to send her an email late at night and, within minutes, receive a supportive and encouraging response back,” wrote another.

The dedication to her students goes beyond the lab—and the classroom.

“In March 2020, I became seriously ill with COVID and was bed-bound and unable to do any work for over four months,” wrote a student. “Pola assisted me personally during my illness; she would run to the pharmacy to pick up medications for me when I was in isolation or would pick me up from medical appointments when I was too ill to drive. I am immensely appreciative.”

Philippidou said she’s incredibly grateful to the selection committee for highlighting mentoring throughout the university and looks forward to continuing to watch her students grow intellectually over the years.

The Diekhoff Award honors John S. Diekhoff, a distinguished scholar, teacher, mentor and administrator who served Case Western Reserve in several capacities during his tenure from 1956 to 1970: professor of English, chair of the Department of English, dean of Cleveland College, acting dean of the School of Graduate Studies and vice provost of the university.

The Diekhoff Award, established in 1978, recognizes outstanding contributions to the education of graduate students through advising and classroom teaching. The annual award is presented to two faculty members who epitomize what it means to teach graduate students: to connect them with experts in their discipline, engage them academically in a forthright and collegial manner, and actively promote their professional development. In 2009, the Diekhoff Award was expanded to recognize two additional full-time faculty members who excel in the mentoring of graduate students. A committee of Graduate Studies students reviews the nominations and recommends winners.