Case Western Reserve University researchers Sanford “Sandy” Markowitz and Dustin Tyler have been elected fellows of The National Academy of Inventors (NAI). The honor highlights the overall career and impact individual inventors have had in their field and society.

Markowitz, a Distinguished University Professor, is the Ingalls Professor of Cancer Genetics at the Case Western Reserve School of Medicine. He was part of the team that sequenced the first complete cancer coding genome. His groundbreaking medical research also has transformed human understanding of the genetics of gastrointestinal cancers. In addition, he helped create the first commercial DNA-based stool test for colon cancer.

Tyler is the Kent H. Smith II Professor of Biomedical Engineering at the Case School of Engineering, where he has become a global pioneer in neural engineering—improving lives by making the prosthesis feel more like a part of the body by restoring the sense of touch to amputees.

Markowitz and Tyler join nearly 20 others affiliated with Case Western Reserve who have been elected as fellows or senior members by the NAI in the last decade.

“I am thrilled that the contributions of Sanford Markowitz and Dustin Tyler have been appreciated and recognized by the NAI,” said Michael Oakes, senior vice president for research and technology management at Case Western Reserve. “Putting scientific discovery to use is fundamental to our problem-solving research mission. I can’t wait for the next amazing invention from our colleagues.” 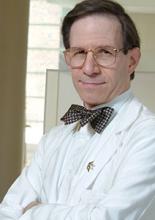 Over the last 35 years, Markowitz has served as lead or contributing author on hundreds scientific papers in peer-reviewed medical journals and has secured more than two-dozen patents and licensed inventions.

His laboratory discovered two key colon cancer tumor suppressor genes, beginning in 2004, when he and his team identified 15-PGDH, a gene that could stop the growth of tumors in the colon.

That crucial discovery and others led to the 2017 launch of Rodeo Therapeutics, a startup based on the research. The company was sold in 2021 to biopharmaceutical giant Amgen Inc. for a $55 million initial payment, with the potential to reach $721 million if the drug proves successful in human clinical trials and the marketplace.

Markowitz said while he was very gratified to be recognized by the academy, “that the credit goes to the whole team of people I’ve been privileged to work with all these years, not to me.

“The team has been really extraordinary, making wonderful contributions which ultimately have had a real impact in the lives of people facing very difficult diseases,” he said. “Our team has always seen that discovery and invention are two faces of the same coin. We translate the discoveries of science into practical opportunities.”

Markowitz said he and his team continue to “look into the basic mechanism by which the drug we invented works to heal tissues. Our intent is to use this information to identify other diseases that will respond to that intervention, especially those that right now don’t have good therapeutic options,” he said. “That’s why we’re doing this—to help those who need it most.”

Tyler has more than 50 U.S.-issued patents and several in foreign countries, with another 40 pending applications nationally and internationally. In addition, three U.S. companies have active licenses on these technologies. A Fellow of the American Institute of Medical and Biological Engineers, he met in March of this year with President Biden at the White House to discuss some of his team’s most recent technology.

But while Tyler’s work, often in partnership with the Louis Stokes Cleveland VA Medical Center, is considered neural engineering— it is increasingly focused on the people, not just the technology.

“We are working to change from using technology to embodying technology,” he said. “This means collaborating across humanities, engineering, medicine, ethics and entrepreneurship to develop human-centered approaches to a human-centered future that expands human potential beyond our biological limitations.”

More specifically, that has meant “developing the most advanced interfaces between human and technology,” he said. “This means we are able to help people with injuries such as stroke, spinal cord injury and limb loss to regain a quality of life that is not possible with medications or any other medical treatment.”

Tyler said he was “extremely honored and humbled” to join CWRU colleagues in the NAI who had been his “mentors and inspiration.” He added that it would “never have been possible without the incredibly talented and dedicated students, engineers, staff and colleagues that I have been privileged to work with over the past 30 years.”

Tyler is also executive director of the Human Fusions Institute, where he is pushing the boundaries of what it means to be human by enabling the mind to transcend the barriers of the body via neural interfaces.

Markowitz and Tyler join a 2022 class of 169 NAI fellows from 110 research universities and governmental and nonprofit research institutes worldwide. The incoming class of fellows collectively hold over 4,800 issued U.S. patents. The full list of names for the 2022 class can be found here.

The NAI Fellows Program highlights academic inventors who have “demonstrated a spirit of innovation in creating or facilitating outstanding inventions that have made a tangible impact on the quality of life, economic development and the welfare of society.” Election as a NAI Fellow is the highest professional distinction awarded to academic inventors.

To date, NAI Fellows hold more than 58,000 issued U.S. patents, which have generated over 13,000 licensed technologies and companies, and created more than one million jobs. In addition, over $3 trillion in revenue has been generated based on NAI Fellow discoveries.

The 2022 class of Fellows will be inducted at the Fellows Induction Ceremony at the NAI’s 12th Annual Meeting on June 27 in Washington, D.C.

The NAI Fellows Program recognizes academic inventors who have “demonstrated a prolific spirit of innovation in creating or facilitating outstanding inventions that have made a tangible impact on quality of life, economic development and the welfare of society,” according to the academy.

Among past recipients affiliated with CWRU in the last decade: