To honor her father while he was in intensive care and hospice, Case Western Reserve University (CWRU) School of Medicine second-year medical student Kathleen Mulligan wrote a song as a tribute to her father during his last few days.

The lyrics to Mulligan’s song will be performed on Saturday, Dec. 11, at Doc Opera 2021: GARLA La Land! 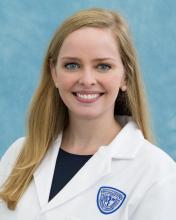 "My incredibly talented classmate and friend Tim Nicholas put together one of the most beautiful orchestrations I've ever heard, and I helped direct how the song should build with all of the instruments," explained Mulligan. "I think this song will be a very special moment in the show."

Doc Opera is an annual fundraiser and variety show written by, directed by, and starring students from the university's health professional programs, including the Case Western Reserve University School of Medicine and Cleveland Clinic Lerner College of Medicine.

Both of Mulligan’s parents faced a series of scary cancer diagnoses while she was in middle school, and observing the care they received showed her what a fulfilling career medicine could be. Those experiences and a natural curiosity for solving mysteries like ones often found in science inspired Mulligan to pursue a career in medicine. Her father was later diagnosed and passed away from metastatic melanoma while she was applying to medical school.

"I grew up loving mystery books and have read all of the Agatha Christie novels," Mulligan said. "I love how medicine often requires a bit of detective work to get to the right diagnosis."

Originally from Phoenix, Arizona, Mulligan is a graduate of Princeton University where she was a four-year college athlete on the swim team. Time spent working as a medical assistant and as a clinical researcher at the Dana-Farber Cancer Institute before attending medical school solidified her path to pursue a career in medicine.

"Working with patients full-time really reinforced that this is what I want to do every day for the rest of my career, so I had no doubts about my career choice by the time I applied to medical school," Mulligan said.

With no ties to Cleveland or Ohio, Mulligan credits her decision to attend CWRU to the interview day experience.

"The interview day absolutely blew me away, and I thought everything about it was perfect! The Dream Team in the admissions office is truly the best at what they do, and even the older students I met at the interview have remained my good friends," she said.

And now, as a second-year medical student, she knows her decision to attend Case Western Reserve was the right one.

"Having access to four totally different hospital systems (University Hospitals, Cleveland Clinic, MetroHealth and Louis Stokes Cleveland VA Medical Center) as well as the faculty, research, and resources that accompany them are unparalleled at any other school," Mulligan said.

As a self-described lifelong singer, Mulligan sang a cappella in college. While researching medical schools, she was excited to learn about the Doc Opera tradition at CWRU and participating in the annual event could be part of her medical school experience. She even shared her excitement about the annual variety show with Associate Dean for Admissions Lina Mehta on her interview day.

Recognizing her enthusiasm for Doc Opera, her classmates recruited Mulligan to be the technical director for the virtual show held last year, and she participated in seven songs. The show was a family event with a cameo appearance by her quarantine-adopted puppy Hercules Mulligan whose name is inspired by the musical Hamilton. She is honored to serve as the production director for this year’s show.

After medical school, Mulligan is unsure about which medical specialty she would like to pursue because she is interested in all areas of medicine.

"I find anything involving cancer to be very rewarding, and I could see myself managing it from either the medical or the surgical side," she said. "I also enjoy the research process and find it very satisfying to see a project through from start to finish, so I can see myself being involved in an academic practice someday."