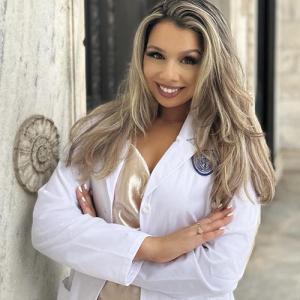 Since arriving at Case Western Reserve University School of Medicine, Larissa De Souza has devoted her time inside and outside the classroom to growing diversity in medicine—realizing the impact it has on the underrepresented communities she serves, as well as the future healthcare professionals who are a part of them.

“As the daughter of Latino immigrant parents, I struggled to see myself as a future physician,” said De Souza.

However, after witnessing health disparities in her Latino community in Boston and during visits to Brazil, De Souza became motivated to pursue medicine.

Although many of De Souza's happiest moments were spent enjoying the natural beauty and culture in Brazil, she could not ignore reality. “While there [in Brazil] I was also exposed to poverty and a public health system where people like my grandfather and aunt (who are both blind) lacked access to proper resources," she added.

After graduating from the University of Massachusetts, De Souza worked as an EMT and credits that experience—along with her efforts as a reproductive rights advocate—for helping her realize she wanted to become a doctor. When she began exploring her next steps, Case Western Reserve University School of Medicine stood out.

“At my medical school interview, I vividly remember opening the doors to the Health Education Campus and feeling like this was a place that I could really see myself exploring my curiosity and growing as a clinician,” said De Souza. “I was very nervous. However, my faculty interviewer was extremely supportive, and it felt like she just genuinely wanted to get to know me. I had many questions, all of which she answered exceptionally, and, after learning about my interest, suggested ways I could further them at Case Western Reserve.” 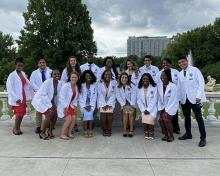 “I felt so welcomed and excited to attend a school where minority students have a strong voice and community. I promised myself that, if accepted, I would carry this forward to make the next generation of minority students feel welcome.”

And she has. De Souza serves as co-director for the Midwest region of the Latino Medical Student Association, overseeing chapters in 13 states at 40 medical schools. She previously served as co-president of the local chapter during her first two years at the university. 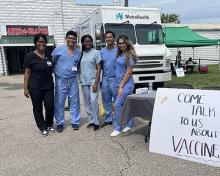 The COVID-19 pandemic ignited De Souza’s passion for community service. She launched a program to address vaccine hesitancy by having medical students and physicians visit people at community events, apartment complexes and churches throughout Northeast Ohio to encourage vaccination.

De Souza cautions undergraduates and first-year medical students not to let insecurities limit their dreams, and to pace themselves in the beginning of medical school.

“The process of becoming a physician occurs gradually, and there will always be work to do for our patients and community,“ said De Souza. “It is OK to build yourself piece by piece, slowly, focusing on foundations and then expanding from there.”