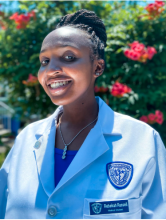 When graduating medical student Suhib Jamal opened his envelope on Match Day in March, it revealed his No. 1 choice for a residency: pediatrics at University Hospitals Rainbow Babies and Children’s. He was thrilled to learn he would be staying in his hometown of Cleveland, allowing him the opportunity to give back to the community that has fueled his passion for medicine.

As a high school student at Cleveland School of Science and Medicine just a few blocks from Case Western Reserve University, Jamal attended the School of Medicine’s Robbins Bridge Program. Founded in 2008 by Robert Haynie, former Robbins Society dean and now a clinical associate professor emeritus of medicine, the program integrates medical curriculum into ninth- through 12th-grade instruction along with programming designed to broaden high schoolers’  exposure to potential careers in medicine.

The medical student-led Cardiovascular Inquiry Seminar Series (CISS) Jamal attended during his junior year as part of the Robbins program solidified his plans to become a physician.

His path to medical school was realized when he was named the second Joan C. Edwards Scholar, which provides one graduate of the Cleveland Metropolitan School District a full scholarship, including room and board, to attend CWRU for undergraduate and medical school.

Fast forward eight years: Jamal returned to the same classroom where he attended the CISS as a high school student—but this time to lead the class as a medical student.

“I was able to bring my fellow med students back to my old high school and teach current students,” said Jamal. “It was incredibly rewarding, and I realized I need to keep doing this in my career.”

Jamal plans to specialize after his residency, so a fellowship is in his future—potentially pulmonology. He is certain that because of his experiences teaching and conducting research, he will pursue a career in academic medicine—ideally in his hometown.

“Staying in Cleveland for residency and hopefully beyond, I can give back to the program that gave so much to me,” said Jamal.