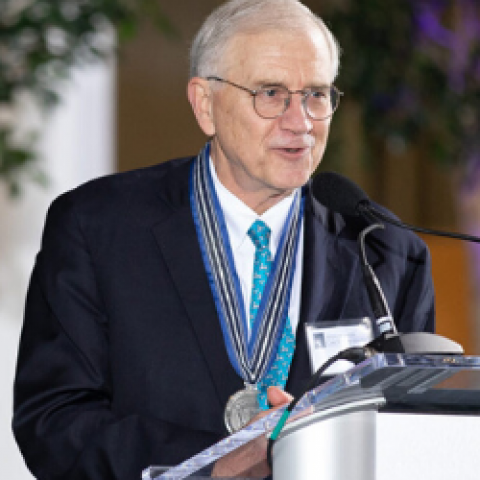 It happens every morning, but for Jim Young, this time was magic.

He was sitting in a 6:30 a.m. meeting at the Health Education Campus, and as the conversation continued the sun began peeking through its west-facing windows.

While the atrium gradually grew brighter, “hundreds and hundreds of students [began] pouring in… It was a remarkable thing, watching the chatter and the buzz and the excitement.”

The Cleveland Clinic’s Chief Academic Officer had been there at the very beginning, back when talks between top leaders of the hospital and Case Western Reserve centered on a 165,000-square-foot joint medical education building.

Now, six years later, he was sitting in the 477,000-square-foot Samson Pavilion, watching students from the university’s schools of nursing, dental medicine, and medicine—including the Cleveland Clinic Lerner College of Medicine—live the leaders’ vision of true interprofessional education, the kind that prepares graduates to lead in team-based health care.

Even better, just a couple of weeks earlier, CWRU’s School of Medicine had recognized Young’s own longstanding efforts to advance the partnership—as well as his extraordinary achievements as a clinician and researcher—with the Case Medal for Excellence in Health Science Innovation. Announced at a school event for alumni and donors during homecoming, the honor came as a surprise.

“I had absolutely no idea that my name was the name that was going to be called,” Young recalled. “I was stunned. The group that I joined are some real luminaries and I just didn’t think of myself as being in that crowd.”

Yet even before joining the Cleveland Clinic in 1995, Young already had earned renown for his clinical research regarding heart failure, repair and transplantation. During his time at the Baylor College of Medicine, for example, he worked closely with Michael DeBakey, known throughout the world for his innovations in cardiac surgery; an internist, Young played key roles in those efforts, as well as the care patients received after the procedures. He has published hundreds of manuscripts and textbooks, and led or co-led some of the nation’s most pioneering multi-center clinical trials related to the treatment of cardiovascular issues.

“He is a national leader in clinical research into heart failure, and in spite of his demanding administrative schedule, still covers patients with heart failure, leads national studies, and serves on prestigious panels,” medical school Dean Pamela B. Davis said during the event. “This alone would justify the award of the medal tonight—but there is more!”

After chairing Cleveland Clinic’s department of medicine and then leading the hospital’s endocrinology institute to among the top five in the nation, Young became Lerner College’s dean—where he raised that program’s stature as well, and then played a pivotal part in what became the Health Education Campus. Now as Cleveland Clinic’s chief academic officer, Young oversees its education and research efforts, including those involving studies of health care using the hospital’s unique model of delivery.

“From the very beginning, the Cleveland Clinic has been focused on the singular mission of patient care on a foundation of research and education,” Young said. “So for me, the most rewarding part of the job is to be able to move that forward, move that into new and different areas.”

That said, his years as Lerner’s dean, as well as his involvement in planning for the HEC, mean his enthusiasm for its potential is as strong as ever—if not even greater. He notes being pleasantly surprised at the speed with which people across multiple programs have settled into the new space—after all, he acknowledges, change can be hard.

And yet, Young adds, “…a team of teams has evolved with all of the schools that are in the building, all of the administrators supporting things in the building, and just how we have shared space and are developing a commune, so to speak, of education, health and health care education in that building that I think’s going to grow to even greater dimensions.”

He looks forward to seeing the community and its educational activities evolve over the coming months, and at the same time is mindful of the imperative of being able measure that progress.

“At the end of the [academic] year, as our curriculums get unwound and as we develop our joint programs, assessing those programs will be the mark of success or failure in my opinion,” Young said. “As we’ve built out what we’re going to be doing together, we’ve been mindful of the need for metrics and need for evaluations and that will certainly be an active part of 2020.”

Find out more about Young in this week’s five questions.

1. What’s something you don’t know how to do but would like to learn?

Play the piano. I love music and I played in a variety of different bands. I played the tuba—not a very delicate instrument—and I’ve always been intrigued by the piano and by the organ. I can pound on the keys but I can’t really play the piano and I think it would be fun to try to learn.

2. Who’s the best teacher you’ve ever had?

Back in the late 1960s, when I was in high school, my English teacher was probably the most intriguing teacher that I’ve ever had, and because of that, she was perhaps the best teacher I’ve ever had. This was back in the 1960s, it was in the San Francisco-Bay Area. She was this crazy, wild hippie and was quite an intellect and quite the muse, if you will, to the students.

From the medical center to home. We work long hours, everyone here, and that’s my best destination. But if I were going to pack a bag and go somewhere more distant, I think my favorite place to go is San Francisco, so it’s going back home in a way, but I’ve often said San Francisco is the best place to travel to and the worst place to live.

4. If you could go back in time and tell a younger version of yourself something, what would you say?

I’d say, you never know what’s going to happen, so keep your eyes open and just go with the flow.

I like Case Western Reserve because of its heritage and the openness that they have to new thinking, new ideas and new concepts. They’ve been a wonderful place to partner and I’ve been very pleased with many of the things that we have built together. Obviously the Health Education Campus is the biggest effort, but we’ve done a lot more with Case [Western Reserve] over the years and I think that’s been very, very rewarding and enjoyable. And I think Case [Western Reserve] is open to the concept of being stronger together with the main players in the city, and in health care, there’s a lot of great places in the city and Case [Western Reserve] has partnered with pretty much every one of them. I see that as one of the best things about CWRU.