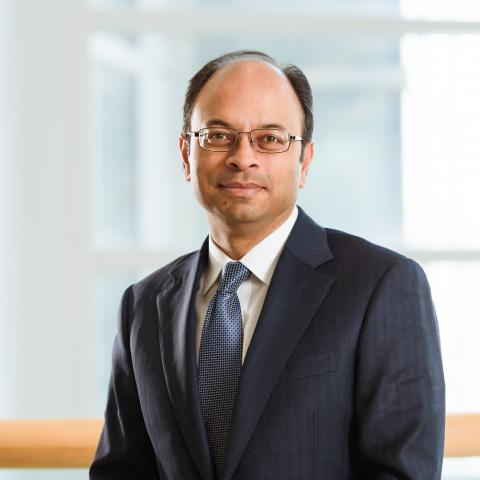 Mukesh Jain, the Ellery Sedgwick Chair and Distinguished Scientist in the Department of Medicine at Case Western Reserve University, is internationally recognized for his discovery of the role of a family of factors termed Kruppel-like factors (KLFs)—DNA-binding proteins that regulate a host of biological processes in the body, including those of the heart, blood vessels and immune cells.

Jain’s research on KLFs has been published in top-tier peer-reviewed journals and has been continuously supported for 15 years through funding from the National Institutes of Health, American Heart Association and American Diabetes Association.

For his pioneering research in this area, his strong commitment to mentorship, and his contributions to the Cleveland biomedical community, Jain will formally be named one of four new Distinguished University Professors at convocation today (Aug. 25). The designation represents the highest honor the university bestows on a member of its professoriate.

Jain joined Case Western Reserve in 2006 from Harvard Medical School. Since then, his academic, leadership and service contributions in science and medicine locally and around the globe have brought significant recognition to the university.

In particular, Gerson noted Jain’s commitment to Cleveland’s biomedical ecosystem has been “deep and sustained.” Prior to Jain’s arrival, Gerson said the cardiovascular research efforts within the community were small and fragmented.

From 2006 to 2016, Jain served as founding director of Case Cardiovascular Research Institute—during which he built a research program that grew to nearly 100 faculty and staff members that spans basic, translational and clinical cardiovascular science.

In 2015, Jain’s role at the university evolved significantly as he assumed an important leadership position as vice dean for the school and chief scientific officer for University Hospitals (UH). In this capacity, he helped establish a strategy that enhanced collaborations across basic and clinical departments within the school and UH, increased the number of high-quality established biomedical researchers and augmented the pipeline of young researchers within the community.

Jain’s stature in biomedical research is perhaps best exemplified by his election as president of the most prestigious physician-scientist organization in the United States, the American Society for Clinical Investigation. This represents the first time in the history of the university that a faculty member has served as president of this esteemed organization.

In addition to his academic and scholarly achievements and appointments, Jain has a distinguished track record in teaching and service. He has received mentorship awards from Harvard Medical School and University Hospitals—and is viewed as an exceptional mentor for trainees and young faculty members within his own program and across other departments.

Jain, whose new appointment as Distinguished University Professor came as a “wonderful surprise” to him, said his mentorship roles are incredibly gratifying and inspiring. His mentees now grace the faculty at institutions such as Harvard Medical School, University of California San Francisco, Baylor College of Medicine, Emory University, and University of Tokyo, to name a few.

“I find great joy and energy by engaging in regional and national efforts to advance science, human health and training the next generation of physicians and researchers,” he added.