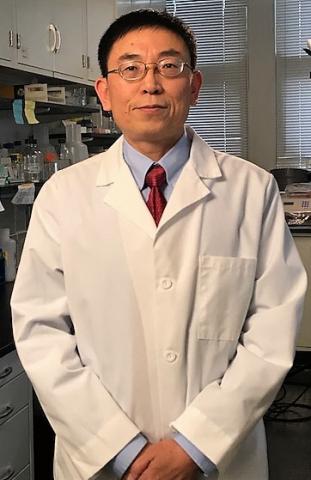 Affecting both people and animals, prion diseases are degenerative brain disorders that can debilitate or kill their victims. The most common form of prion disease affecting humans is sporadic Creutzfeldt-Jakob disease (sCJD). There are about 350 cases of the disease in the U.S. each year. Disease symptoms include dementia, difficulty speaking and walking, and hallucinations. Examples of prion diseases in animals include mad cow disease in cattle, chronic wasting disease in elk and deer, and scrapie in sheep and goats.

Another medium for transmitting the disease can be surgical instruments used in brain surgery on infected patients, but which are not properly cleaned. Other risk factors include a family history of prion disease and receiving contaminated transplanted corneas. In addition, diagnosis of the disease is complicated by the fact that human symptoms of prion disease are similar to those of other serious neurological conditions, such as Alzheimer’s disease, making diagnosis difficult.

In prion diseases, the normal prion protein PrPC is converted into an abnormal, misfolded version, PrPSc, mainly in their brains known for a long time. Wenquan Zou, MD, PhD, and his collaborator, Qingzhong Kong, PhD, of Case Western Reserve University School of Medicine, have been awarded $2.9M from the National Institutes of Health to extend their previous path-breaking finding of skin prions of these devastating diseases.

Zou, the leading PI, and Kong, the co-PI, both are associate professors in the departments of Pathology and Neurology and the National Prion Disease Pathology Surveillance Center of Case Western Reserve University School of Medicine. Last November, they published a paper in Science Translational Medicine describing that infectious prions are present in the skin of cadavers with sCJD. This finding raised two critical questions that they will explore with the new NIH grant: 1) Can skin prions serve as a pre-mortem and post-mortem diagnostic biomarker for sCJD?  2) Are skin prions a source of prion transmission between humans?

Currently, a definitive diagnosis of sCJD relies on the examination of a patient’s brain tissue obtained at biopsy at the clinical stage or at autopsy. Pre-clinical diagnosis of human prion diseases has not been possible to date since there have been no reports of PrPSc-detection in any tissues or bodily fluids at the pre-clinical stage. “Our recent findings suggest that skin PrPSc could indeed be a useful biomarker for CJD diagnosis as well as a way of eventually seeing how the disease is progressing and how well treatment is working in people with the condition,” said Zou.

Using a large number of autopsy and biopsy skin samples, he and his colleagues will work to validate their own innovative skin-based PrPSc test as a pre-mortem (or even pre-clinical) and post-mortem diagnostic test for various human prion diseases. They will also explore using the test in disease-progression and therapeutic-efficacy studies. This includes deploying humanized transgenic mice generated in the Kong laboratory to mimic clinical surgical procedures to determine whether surgically-contaminated instruments can cause transmission of prion disease in animals.

“Skin prions could be a source of transmission of sCJD during surgeries, given that epidemiological observations suggest an association of sCJD risk with a history of having various non-neurosurgeries,” said Kong. It has been reported that sCJD is transmissible through surgical operations involving infected brain or cornea tissues, or administration of brain-derived contaminated growth hormone and gonadotropins (hormones that stimulate the testes in males, and the ovaries in females).

“Our study is also potentially important for other common neurodegenerative diseases such as Alzheimer’s and Parkinson’s diseases,” said Zou. “This is because misfolded proteins, such as the tau protein associated with Alzheimer’s and the α-synuclein protein associated with Parkinson’s, have also been observed in the skin of patients with these diseases. It is possible that our ultrasensitive skin-based test could be adapted for diagnosis of these diseases as well.”