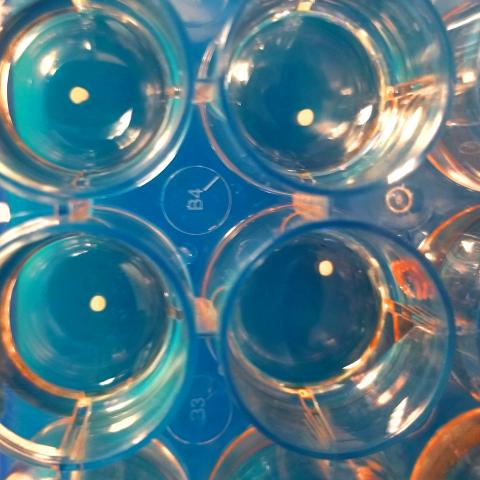 Since its debut, so-called organoid technology has revolutionized researchers’ ability to generate and study human tissue in the laboratory. But when it comes to the brain, the models were not entirely complete. This new study provides a missing link.

“We have taken the organoid system and added the third major cell type in the central nervous system—oligodendrocytes—and now have a more accurate representation of cellular interactions that occur during human brain development,” said Paul Tesar, PhD, the Dr. Donald and Ruth Weber Goodman Professor of Innovative Therapeutics and associate professor of genetics and genome sciences at Case Western Reserve University School of Medicine.

Oligodendrocytes are critical for a healthy brain. They make myelin, a fatty substance that wraps and supports nerve cell connections, much like insulation around an electric cord. Without myelin, nerve cells cannot communicate effectively and can deteriorate. Many neurological diseases result from myelin defects, including multiple sclerosis and rare pediatric genetic disorders.

“This is a powerful platform to understand human development and neurological disease,” said Tesar. “Using stem cell technology we can generate nearly unlimited quantities of human brain-like tissue in the lab.  Our method creates a ‘mini-cortex,’ containing neurons, astrocytes, and now oligodendrocytes producing myelin. This is a major step toward unlocking stages of human brain development that previously were inaccessible.”

Tesar and colleagues also demonstrated how their improved organoid system can be used to test myelin-enhancing medications. “These organoids provide a way to predict the safety and efficacy of new myelin therapeutics on human brain-like tissue in the laboratory prior to clinical testing in humans,” said Mayur Madhavan, PhD, co-first author on the study. The team treated organoids with drugs previously identified to enhance myelin production in mice. For the first time, the researchers used the model to test drugs that enhance the generation of human oligodendrocytes and myelin.

The research team also generated organoids from patients with Pelizaeus-Merzbacher disease, a rare but fatal genetic myelin disorder. “Pelizaeus-Merzbacher disease has been a complicated disorder to study due to the many different mutations that can cause it and the inaccessibility of patient brain tissue,” said Zachary Nevin, PhD, co-first author on the study, “but these new organoids allow us to directly study brain-like tissue from many patients simultaneously and test potential therapies.” Organoids generated from patients with three different Pelizaeus-Merzbacher disease mutations each demonstrated unique characteristics that could be targeted for drug treatment. The findings validate the set-up as a versatile platform to observe and dissect human myelin disease and test individualized therapeutics.

“Our method enables generation of human brain tissue in the laboratory from any patient,” said Tesar. “More broadly, it can accurately recapitulate how the human nervous system is built and identify what goes wrong in certain neurological conditions.”

For more information about the Tesar laboratory, please visit: tesarlab.case.edu