Remembering Paul Ernsberger, associate professor and regarded researcher at the School of Medicine 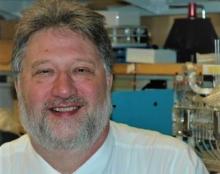 When Paul Ernsberger was a child, his parents gave him a chemistry set for his birthday. That gift sparked a passion that led to a more than 40-year career in science through which he helped shape understanding of blood pressure, blood glucose and obesity.

After decades of contributions to the field, and more than 30 years on the faculty at Case Western Reserve University School of Medicine, Ernsberger died in May; memorial services will be held next month.

A native of Yonkers, New York, Ernsberger’s life took him across the U.S.—living in New York, Ohio, Texas and Connecticut before completing his bachelor’s degree in physiological psychology in St. Paul, Minnesota, at Macalaster College in 1978. He earned his PhD in pharmacology from Northwestern University’s Feinberg School of Medicine in 1984, then became an assistant professor at Weill Cornell Medical College in New York City for five years.

Ernsberger moved to Cleveland to join the Case Western Reserve University School of Medicine faculty in 1989; 32 years later, he was an associate professor, director of the Laboratory of Metabolic Pharmacology, and an instructor for the Seminar Approach to General Education and Scholarship (SAGES) program.

In the School of Medicine, Ernsberger led medical student inquiry groups, where “his teaching was highly praised by the students and faculty,” said Henri Brunengraber, the Mt. Sinai Auxiliary Professor in the Departments of Nutrition and Biochemistry. “He was always ready to share his extensive scientific knowledge with students and colleagues.”

That knowledge extended from the classroom to the lab, where Ernsberger was a prolific researcher on metabolic syndrome and obesity.

Early on in his time at Case Western Reserve, Ernsberger met Richard Koletsky, clinical assistant professor of nutrition and medicine, with whom he formed a lasting research partnership exploring the adverse effects of weight cycling—or repeated bouts of weight loss and gain. Together, their work demonstrated how weight cycling stimulated the sympathetic nervous system, increasing weight gain and insulin resistance. They also examined the effects of diet variations, and studied drugs used to treat high blood pressure, diabetes, and lipids to discover the best methods to combat metabolic syndrome.

Ernsberger transitioned into human subject research shortly before his death—an extension of his prior bench work. His latest research interests and approaches were varied: On one side, Ernsberger exploited new methods for multianalyte assays capable of measuring 18 substances simultaneously in a single drop of plasma; on another, he capitalized on anonymized patient data from electronic records.

Throughout his career, Ernsberger became highly regarded in the field of metabolic syndrome and obesity, authoring 438 publications that have been cited by scientists nearly 11,000 times.

Ernsberger also was held in esteem by a community of advocates dedicated to advancing body acceptance, serving as a keynote speaker at conferences held by Healthy at Every Size and the National Association to Advance Fat Acceptance.

In addition to his love of science and medical research, Ernsberger enjoyed music—singing bass in Choral Arts Cleveland and the Unitarian Universalist Congregation of Cleveland choir, and playing the string bass for a variety of bands. He also volunteered with the social justice arms of the Unitarian Church and the Greater Cleveland Congregations.

Ernsberger is survived by his son, Tim (CWR ’11; GRS ’13, computing and information science); his partner, Cathy Niswonger; his brother, Dan; and his sister, Gail Scott.

All those who knew Ernsberger and wish to attend either service are invited. To be added to the Zoom distribution list, please contact his sister, Gail Scott, at gailscott222@gmail.com.