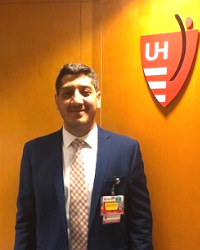 Khaled Shorbaji grew up in Kuwait before moving to Syria to attend Damascus University, the first step to fulfill his childhood dream of becoming a doctor.

When he graduated in 2011, Syria had just begun a long civil war, with citizens protesting peacefully and challenging the regime’s systemic torture. As the humanitarian tragedy continued, Syrian medical professionals took action, risking their lives operating in secret field hospitals across the country to provide essential life-saving interventions to wounded protesters.

Shorbaji volunteered in one of these centers. “What I’m most proud of in my life so far is helping to take care of the wounded in these triage centers as well as starting up several of them,” he said.

“It was during this tumultuous time that I decided I wanted to become a cardiac surgeon and continue my medical education in the U.S.,” Shorbaji said.

He was refused a visa nine times before his persistence paid off and he made his way to the U.S.

Shorbaji dreams of providing surgical care across the world to those in war zones who need it most. He is grateful for Case Western Reserve University School of Medicine awarding a scholarship allowing him to pursue a Master of Public Health degree which will teach him essential disaster management skills.

“I have been so fortunate to work under the exceptional mentorship of the UHCMC Department of Surgery chair, Dr. Joseph Sabik, and the head of the Division of Cardiac Surgery, Dr. Marc Pelletier,” Shorbaji said.

As he achieves his dream of becoming a cardiac surgeon and a public health worker, he is thankful for everyone who helped him along the way, including Cheryl Thompson, PhD, Associate Professor and CWRU School of Medicine Assistant Dean of Educational Initiatives.