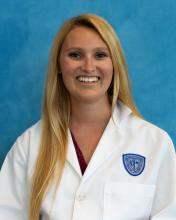 “It’s been exhausting—but so rewarding! I’m really going to miss this when it’s over,” Madeline (Maddie) McKenna, an M2 (second-year medical student) said about being one of ten directors for Doc Opera 2020: Trauma Mia.

Doc Opera, the largest student-run organization in the Case Western Reserve University (CWRU) School of Medicine with participation from all four classes, is a true testament to how much those who volunteer care about the show. When the show runners were looking for someone to coordinate all the parts of the variety show—while maintaining continuity of the virtual production—McKenna was happy to volunteer.

“My experience as program director for last year’s Doc Opera, The Wizard of Gauze, prepared me well for my role this year,” she said. “I am so impressed with how talented my classmates are. I have no illusions about my lack of singing and dancing talent, but I love being involved with the show!”

This year’s show is decidedly different.

“We started working on the show in February, and as the pandemic spread, we knew by summer that it would have to be virtual. Everything has been pre-recorded by my colleague, George Saieed, and me, splitting filming duties for 20 acts.”

All proceeds from the show benefit the Student-Run Health Clinic, founded and operated by CWRU students to serve the health needs of the Greater Cleveland community, free of charge.

Growing up in Dayton, Ohio, McKenna originally thought she would become a photojournalist. That changed when, as a teenager, she accompanied her father (a 1992 School of Medicine alumnus) and a group of volunteer medical professionals to Honduras to partner with health organizations in the local community.

“The experience completely sparked my interest and passion for medicine,” she said.

That passion turned into earning her undergraduate degree at Notre Dame before enrolling at the School of Medicine with a goal to specialize in obstetrics and gynecology, providing healthcare access to women.

“Case Western Reserve is, by far, the best medical school in Ohio and one of the best nationwide,” McKenna said. “Students here are so much happier, working hard, but also enjoying time with friends outside of classrooms and labs. There’s a great structure to the curriculum with exams every three to four months followed by time afterward to relax and take a break. Cleveland is the biggest city I’ve lived in and there’s so much to do—great restaurants, national sports teams and so many activities.”

In her first year, McKenna was elected as one of two social chairs on the Committee for Student Representatives. “We organized ice cream socials for second-year students after exams, a boat cruise for first-years, Browns tailgate parties, and the Hippo Ball, the med school ‘prom’ held at the Aquarium last year, with all of us dressed up and dancing among the fish.”

In this, her second year, everything changed with COVID-19. “The last in-person event I attended was a party at a brewery last March,” McKenna said. But she remains optimistic about the future and her career as a doctor.

What are some things that keep her optimistic? There’s Chia, her grey cat, Notre Dame football, running—and trying out for the 2021 Cleveland Marathon, and doing the New York Times Sunday crossword puzzle.

Update, Dec. 18, 2020:  Congratulations to the cast and crew of Trauma Mia, the 2020 Doc Opera held Saturday, Dec. 12! The virtual variety show was a smashing success! The directors, cast and crew sold over 600 tickets, the biggest audience in Doc Opera's 36-year history, and raised over $25,000 for the Student-Run Health Clinic.