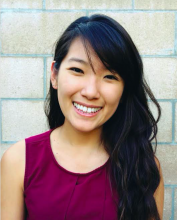 Fourth-year student Michelle Lee decided somewhat recently, during her last years as an undergraduate at the University of California, Berkeley, to study medicine.

“I had volunteered with children and was studying to be a teacher,” Lee explained. “That changed after becoming involved in a program with children whose lives were changed forever by their parents’ cancer illnesses. From that experience and my passion for caring for people, I decided to change course and go to med school.”

Born in South Korea, Lee’s family moved to Ventura, California, when she was in middle school. “I became fairly obsessed with surfing—it’s such a great way to grow up,” she said. Going north to college in Berkeley as an undergraduate was a huge culture change. It’s also where she met other motivated students who wanted to make a difference.

“While searching for a medical school, Case Western Reserve stood out for me from the very beginning,” Lee said. “Most of the schools I looked at had traditional curriculums, but I was drawn to CWRU’s innovative medical education program, particularly to Case Inquiry (IQ) and the emphasis on group learning.” A hallmark of CWRU’s medical education, IQ teams are small student-centered learning groups led by a faculty facilitator. Working closely and long enough to develop learning and mentoring relationships, these small teams engage in discussions that promote learning, reasoning and knowledge synthesis, and develop skills including teamwork, professionalism and critical appraisal.

When the campus shut down in March 2020 as COVID-19 began to spread, Lee went home and studied remotely for the next several months. “It was hard, but most of my colleagues learned to roll with it—just like you must do as a physician.”

She also became involved with the Cardiovascular Inquiry Seminar Series (CISS), a program at the Cleveland School of Science and Medicine at John Hay High School, to broaden high school students’ exposure to the process of becoming a doctor and the reality of being involved in patient care. Because of COVID, there were only six high school students in CISS this year, and all of them went on to participate in an immersion program where they attended additional IQ sessions. “The kids were great, and I enjoyed and appreciated my involvement in the program this year,” Lee said.

Lee chose emergency medicine as her specialty because she thrives in high-pressure settings and wanted to be involved at the frontier of medicine. “Emergency centers treat everyone who comes through their doors. I like the mystery of not knowing what I’ll find from day to day and the opportunity to treat patients with a wide variety of pathologies.”

On Match Day last month, Lee was thrilled to learn she would become a resident at The Ohio State University Wexner Medical Center. “For the next three years, I will be in residency at one of the largest academic medical centers in the country and help care for an underserved and vulnerable patient population. I am particularly interested in disaster medicine and prehospital care with emergency medical systems (EMS). OSU offers multitudes of subspecialty training and everyone at the resident level has access to top resources and a leading-edge education.”