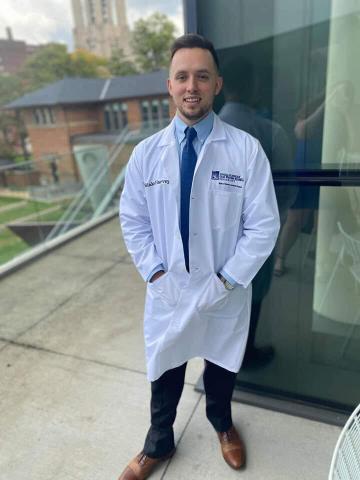 No one could have foreseen the accident Case Western Reserve University School of Medicine student Blake Harvey was involved with during his time as a fire controlman in the U.S. Navy.

Harvey was aboard a Navy helicopter that began plummeting into the Gulf of Aden in the Indian Ocean. With no other options available, he braced for impact.

He awoke in darkness, gasping for air—only to swallow salty water. He was trapped in the submerged aircraft, pinned to the wall by his safety restraints. As the helicopter sank deeper into the ocean, Harvey was fighting for his life with everything he had left.

“I got myself out of that sinking aircraft and months of medical care followed,” he explained, “but that experience would send my life in a direction I could have never imagined.”

In the aftermath of the accident, which left him with a traumatic brain injury, Harvey was surrounded by medical professionals who dedicated themselves to helping others. He spent a fair amount of time under some form of anesthesia, between flights, travel, procedures and general pain control.

In the months that followed, Harvey wasn’t able to do the job that had become such a big part of who he was, and he separated from the Navy for medical reasons.

Harvey had to think about his next chapter in life. He asked himself, “Do I give up, letting this accident define who I am, or do I take control and use this second chance at life to do something meaningful?”

He thought back to the people who helped save his life—the calm steadiness of the doctors helping him in his time of need, the nurses who were with him around the clock, and the surgeons who made his second chance at life possible.

“One of the greatest challenges we must accept is that life can and will change at any moment,” he said. “I never thought that I would fall from the sky, but I did. I did, and I survived. I have exceeded all expectations I ever set for myself, and now I yearn for more.”

Harvey began applying to universities with one goal in mind—to become a part of the medical field. He interviewed at a few colleges, but ultimately chose Case Western Reserve University, where he’s currently a student in the School of Medicine’s Master of Science in Anesthesia Program.

“CWRU is just simply on another level,” Harvey said. “The campus, people, expectations, and passion projected from everyone at the university is what drew me in. The instructors are leaders in the field with amazing insight on how we need to perform didactically and professionally in order to push the field forward.”

Harvey’s goals for himself extend far beyond this next step in his education.

“[Earning my MSA] marks the beginning of a personal dedication to helping those around the world,” he explained, “just as those doctors had done for me.”

In honor of Veteran’s Day today, Nov. 11, Harvey wanted to remind people to check in with their veteran friends and family whenever they can.

“Sure it feels good to be thanked for your service,” he said, “but oftentimes it’s just nice to have someone to talk to.”

For those looking to give back to the veteran community, Harvey said there are many organizations that provide services to veterans that could use the public support.

“I personally work with the Wounded Warrior Project and Semper Fi Fund, two programs I personally cannot speak highly enough of,” he noted.