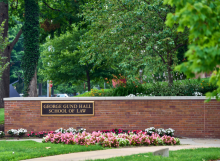 As a young man, Reitze loved the outdoors, and took great pleasure in activities such as hiking, camping and backpacking. He also believed that the law could be a transformative force to improve the world and society, so becoming a lawyer was a natural progression. He earned his law degree from Rutgers University and had a brief stint with a litigation firm in Newark, NJ. Unsatisfied with that work, he sought a career that allowed him to balance the benefits of law as a force for change with his love of the outdoors. Teaching seemed to offer the work/life balance he desired, so he taught as an instructor for a year at Indiana University and another year at the University of Michigan. After two years he was ready to take a tenure track position.

In 1965, Reitze accepted a full-time faculty position at Western Reserve University (WRU) Law School to teach tax law. He had no experience teaching tax law at the time. “I worked hard to learn tax law, but I gravitated to pro bono work involving the environment I was living in, which at the time was terrible,” Reitze said. He planned his tax law courses and taught them to the best of his ability, but the environmental work kept his attention.

Indeed, Cleveland’s industrialization had taken a toll on the surrounding environment. Waterway pollution was standard operating procedure for many mills and plants, and dilution was the panacea for any hazardous waste. The Cuyahoga River, frequently slick with oil, had caught fire numerous times prior to Reitze’s move to Cleveland. These fires were generally met with indifference prior to the 1960s, as they came with the territory in a robust industrial economy. Reitze directly challenged this indifference, serving as the legal counsel for environmentally conscious groups such as the Izaak Walton League, Citizens for Clean Air and Water, and the TB and Respiratory Disease committee on air pollution. “The environmental legal organizations that are important today did not exist and the older conservation organizations… were small and focused on public lands,” Reitze noted.

His work for these smaller groups dedicated to pollution control placed Reitze at the frontier of environmental law and policy in Ohio. As an educator, he was about to begin cutting his own pathway through the thickets. When WRU appointed Louis Toepfer as dean of the law school, he met with Reitze about hiring a new tax professor. (The person eventually hired for this position was Leon Gabinet, Coleman P. Burke Professor Emeritus of Law.) Reitze recalled the conversation: “He asked me what I would like to do if I could choose anything. I replied that I would like to teach natural resource law focusing on the problems of the eastern U.S., including air and water pollution, coal mining, nuclear power and waste, and administrative law (focusing on energy issues).” Toepfer was receptive, so Reitze developed a curriculum, becoming the first full-time law faculty member in the country solely focused on environmental law.

Reitze published two articles based on his pro bono efforts, titled “Wastes, Water, and Wishful Thinking: The Battle of Lake Erie” and “The Role of ‘Region’ in Air Pollution Control.” In the first article, Reitze documented issues with Lake Erie that remain relevant today, such as algal blooms caused by excess fertilizer runoff. In the second article, he discussed how to regulate pollutants. Reitze had a strong distaste for the regional model proposed, which lacked any sort of defined authority. Additionally, he co-authored an air pollution ordinance for the City of Cleveland in 1969, which was considered the most stringent regulation on pollution outside of California. His students also made an impact, including one research assistant, Jim Walpole, who went to the Department of Justice and later became General Counsel for the National Oceanic and Atmospheric Administration.

The grassroots environmental movement that Reitze helped foster in Ohio had many analogues across the country. These state movements eventually brought intense political pressure and made plain that previous federal efforts were not sufficient. This culminated in the establishment of the federal Environmental Protection Agency (EPA) in 1970. This agency would administer the newly enacted amendments to the Clean Air Act and the Federal Water Pollution Control Act (now called the Clean Water Act). If not for the efforts of Reitze and others, however, the landscape of environmental law may have been delayed or reconfigured. His “Battle of Lake Erie” article was cited in the Congressional Record in October 1969, mere months before the EPA would be created, and the June 1969 Cuyahoga River fire (about which Center Director Jonathan Adler has written extensively) would become a focal point for environmentalists nationwide.

Reitze’s dedication to environmental conservation gave Case Western Reserve University (CWRU) the distinction of being the first law school to have a faculty member teach environmental law full time. After his time at CWRU, Reitze continued to establish the frontier. In 1970, George Washington University offered Reitze the opportunity to build a graduate program for environmental law, the first of its kind in the United States. While his time at CWRU only spanned five years, Reitze described the time in Cleveland as life-altering.

“I will always remember that Dean Toepfer was my mentor, and he had a profound impact on my career,” Reitze said.