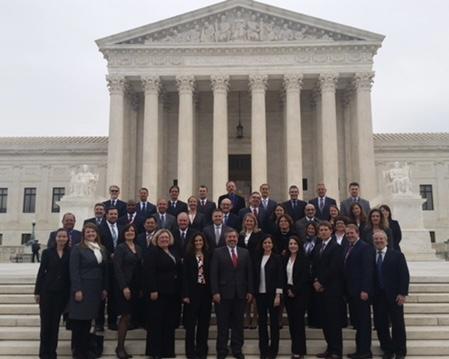 CWRU School of Law faculty and alumni traveled to the US Supreme Court for a mass swearing in ceremony in 2016. The next ceremony is planned for 2023.

This is the second time a petitioner in the U.S. Supreme Court has invited the Cox Center to weigh in about an important international law matter. The issue at the heart of the case, Golan v. Saada, is whether a child taken to the United States by his American mother should be returned to his Italian father in Italy in light of the father’s violent tendencies.

The Hague Convention on Child Abduction provides an expedited process for returning children who have been taken from their state of habitual residence.  But it contains an exception in Article 13(b) where there is a grave risk that the return of the child would expose the child to certain types of harm or otherwise place the child in an intolerable situation.

Here, the trial court recognized the grave risk to the child but held that “protective undertakings” provided by the Italian judicial system (such as monitoring the father’s visitation) were sufficient to protect the child, and the Second Circuit Court of Appeals upheld the decision, creating a Circuit split.

The Court should reject the Second Circuit’s judicial amendment to the Child Abduction Convention, requiring the consideration of protective undertakings after a finding of grave risk to the child under Article 13(b) of the Convention, the Cox Center Brief argues. To support its argument, the Cox Center analyzes the treaty text in light of its object and purpose, discusses a series of cases interpreting the treaty by foreign courts around the globe, and delves into whether U.S. courts are capable of fairly assessing foreign judicial systems to determine if protective undertakings are adequate in such a case. “In this case, the district court expressly found that the petitioner had shown the grave risk exception was met. No more should have been required of her, and thus the judgment of the Second Circuit should be reversed,” the Brief concludes.

The case will be argued before the Supreme Court this spring.  Adjunct Professor/alumnus Andrew Zashin (LAW ‘93) of Zashin and Rich law firm is co-counsel for the petitioner, Narkis Aliza Golan.