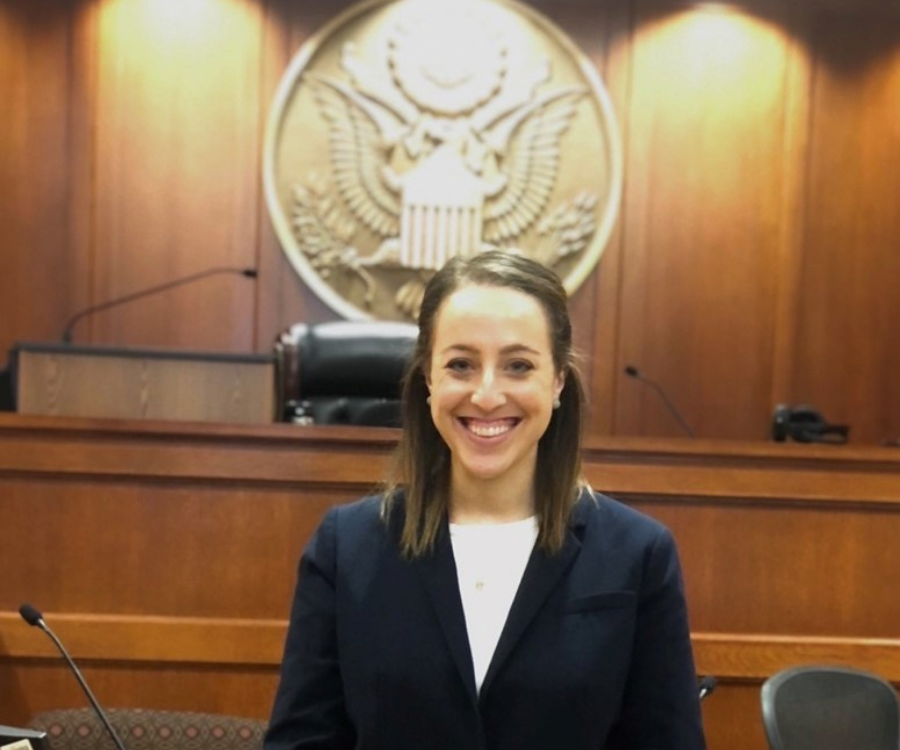 Her client, Michael Wood, wore a shirt bearing the words “F*ck the Police” to the county fair. According to Wood, the defendant police officers ordered him to leave and escorted him from the fairgrounds because of his shirt. Wood, who levied numerous profanities at the police and the fairground’s administrator, was arrested for disorderly conduct but the charges were dismissed.

Wood filed suit against the officers for false arrest and retaliation. His lawsuit alleged that the defendants falsely arrested him in retaliation for his protected speech.

Based on Coulter’s argument, the Court of Appeals reversed a lower federal court’s ruling that the officers were entitled to qualified immunity against these claims. Coulter argued the case in the Sixth Circuit on behalf of Wood in November 2021. Co-counsel Lynette Dinkler authored the brief. David Carey, deputy legal director at the ACLU of Ohio, also argued in support of Wood on behalf of the ACLU of Ohio as amicus curiae.

“The First Amendment protects speech critical of the government, including law enforcement, even when laced with profanity,” Coulter said. “I’m glad the Sixth Circuit reinstated Mr. Wood’s claims and vindicated the right to be free from false arrest and retaliation based on protected speech.

“This is an important decision that reaffirms important First Amendment principles, and I’m grateful that I had the opportunity to argue this case.”

In reversing the lower court’s decision, the Sixth Circuit affirmed that the First Amendment protects the right to criticize public officials and prohibits police from arresting people solely because of “coarse” language. The Court’s decision also clarifies when government officials are entitled to the defense of qualified immunity, where state actors are immune from liability for constitutional violations unless the particular violation was “clearly unconstitutional” at the time.  Application of the qualified immunity doctrine to police conduct has been at the forefront of the current national debate about racial justice.

The First Amendment of the United States Constitution prohibits the government from arresting someone for protected speech. For speech to constitute a crime, it has to fall into one of a very few, specific exceptions. In Wood’s matter, the officers contended that Wood’s repeated profanities constituted “fighting words,” an exception established by the United States Supreme Court in the 1942 case of Chaplinsky v. New Hampshire, which upheld a conviction for calling a police officer a “racketeer” and a “fascist.” The Sixth Circuit recognized that while the “fighting words” doctrine has been “very limited” and “standards of speech have changed dramatically since 1942,” Ohio decisions have been “discordant” with First Amendment speech protections.

“Sara did a masterful job delivering oral argument in this complex and important case,” said Andy Geronimo, director of the First Amendment Clinic. “I’m glad that the Sixth Circuit upheld a narrow application of the ‘fighting words’ doctrine that originated with the Chaplinsky case in 1942—the courts have repeatedly refused to expand ‘fighting words,’ in recognition of the important interests in protecting even speech we disagree with. This decision also emphasizes that a state court decision misapplying federal constitutional standards does not give rise to a qualified immunity defense.”

The case number is 20-3599 and it has been covered in Bloomberg Law, The Associated Press, FindLaw, The Hill, Reason, and elsewhere.