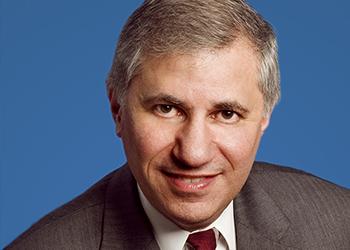 Case Western Reserve University School of Law alumnus Martin Gruenberg (LAW '79) was sworn in as Chairman of the FDIC Board of Directors on Jan. 5, 2023.

This marks his second time leading the agency, which insures trillions of dollars in deposits at the nation’s banks. The FDIC also examines and supervises financial institutions for soundness, performs certain consumer-protection functions, and manages receiverships of failed banks.

In 2012, Gruenberg was inducted into the Society of Benchers, the School of Law’s Hall of Fame. Inductees are selected on the basis of extraordinary achievement and dedication to the highest principles of the legal profession. He is an engaged alumnus who has spoken several times at law school events.

“This appointment caps an extraordinary year for our alums,” said Co-Dean Michael Scharf. “In the past twelve months, Fred Gray (LAW ‘54) received the Presidential Medal of Freedom, Justin Bibb (LAW ‘18) was sworn in as mayor of Cleveland, Bridget Brennan (LAW ‘00) and Charles Esque Fleming (Law ‘90) were appointed to the Federal Bench and now Martin Gruenberg has been appointed by a second President to serve our country in an incredibly important leadership role.”