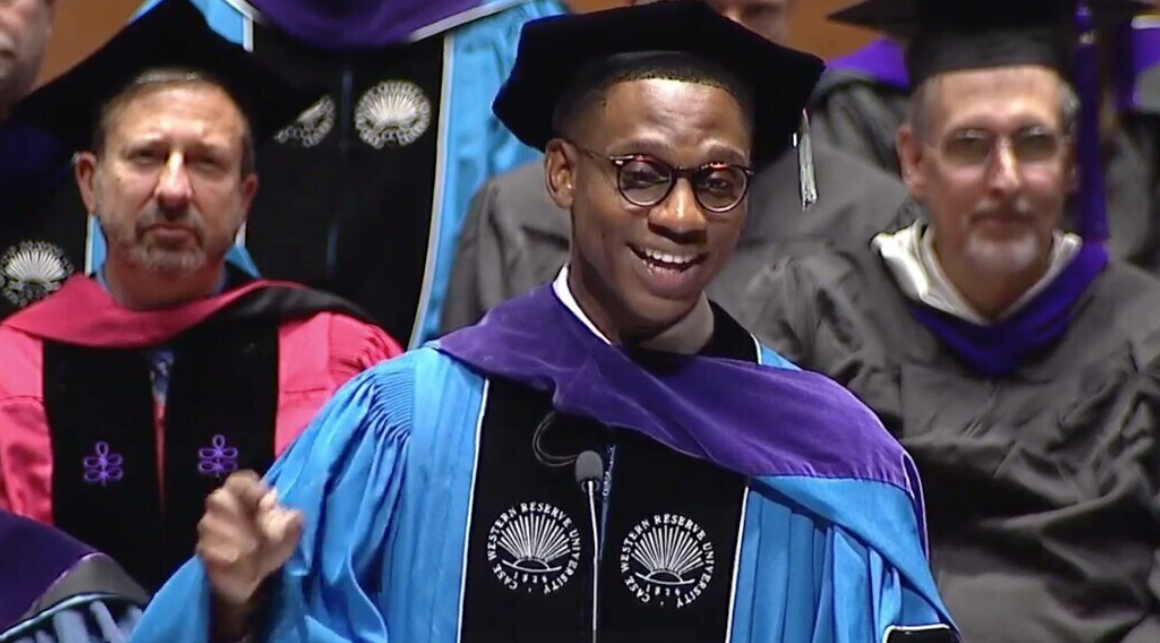 On Saturday, May 14, 2022, Case Western Reserve University School of Law marked the 130th year since its founding with a Commencement ceremony for the Class of 2022. At Severance Music Center, the law school awarded 114 JD, 105 LLM, 34 Master and 13 SJD diplomas to students from 23 States and 12 countries. More than 1,000 family members and friends attended and celebrated the graduates and their achievements. 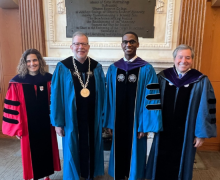 In his opening remarks, Co-Dean Michael Scharf said that the Class of 2022 had “left an indelible mark on this law school.” He noted that their time “corresponded with shocking incidents of racial injustice that sparked mass protests throughout the nation, an incredibly divisive presidential election that culminated in a violent riot at the Capitol, a Russian invasion of Ukraine that marked the return of the Cold War, and the worst pandemic in 100 years that has claimed nearly one million U.S. lives.”

"But rather than become distracted, you retained your focus; rather than become dispirited, you persevered. Within our virtual and physical classrooms you engaged in vigorous debates about the weighty legal issues of the day. You won an unprecedented number of awards at national and international moot court and mock trial competitions. You edited and wrote impressive law review articles that will have an impact on the law. And in our clinics, labs and externships you’ve worked on cases that have changed—and in some cases, literally saved—lives! You have made us all very proud,” he said.

Scharf told the graduates that through their resolute efforts, they have obtained one of the most powerful degrees in education. "With it, you can become the defenders of liberty, the champions of just causes, the protectors of the powerless, and the clear-sighted counselors of our society.”

Eric B. Levasseur (LAW ’02), a partner at Hahn Loeser & Parks LLP and Law Alumni Association Board president, told the graduating students that they will soon see the rewards of their hard work in many ways—in the difference they make in their clients’ lives, the impact they have in their communities and the legacies they begin to build for those who follow in their footsteps.

Student Bar Association Co-Presidents Nadia Haile and Makela Hayford addressed their classmates and listed a few of the events that happened during their law school years—the global pandemic, racial strife, the insurrection and contentious Supreme Court hearings all happened as they studied for their law degree. "Our class has grit, which will be vital to our success as attorneys," Haile said.

Hayford said she kept a notebook of all the times she was disappointed, outraged or shocked by an outcome or reasoning of a case or rule. "We all know the stakes are high—the effects of many ill-conceived or ill-enforced laws produce wars, genocide, slavery and significant human rights abuses, the loss of reproductive rights, the inability to marry who you love, systemic and institutional racism. There is great responsibility that comes with learning the law," she said.

"My favorite part about being in this class of 2022 is that no matter how many times the so-called unprecedented, uncertain, unfamiliar, the complete utter chaos of the past three years flung itself between us and our commitment to building a better world, we stayed the course. We built paths for others. We helped each other along the way. .... We protested. We made noise. We changed policies. We showed up."

Cleveland Mayor Justin M. Bibb, a 2018 dual School of Law and Weatherhead School of Management graduate, gave the Commencement address. Bibb is the first millennial to lead the city of Cleveland. His vision for Cleveland is to become a national model for city management, police reform and neighborhood revitalization.

“It’s good to be back home,” said Bibb, noting that it has been just four years since he attended his own graduation ceremony at the CWRU School of Law—”nervous, scared and excited” about the future. “But I knew that I had the skills and the perspective I needed to go change the world.”

“The ability to think like a lawyer is a superpower in today’s world,” he added, “where we struggle to agree on basic facts, where respectful well-reasoned diplomatic arguments can seem like a relic of a forgotten time. I lean on my law school education every day, both in my capacity as mayor as well as a citizen of this nation. 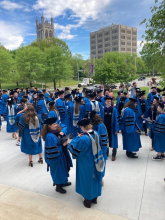 “Now more than ever, the world needs you—it needs you to seek truth, it needs you to right society’s wrong. It needs you to ask and analyze the hard questions and have the courage and moral compass to meet the moment we are in.”

The mayor drew great applause when he noted his penchant for hiring CWRU law alumni. "I might be a bit biased but as a Case law grad, I think we have something very special. I know this because nearly half my cabinet comes from Case law school. Together we are writing a new chapter in Cleveland’s history, and we are the authors of that chapter and I know we will get it done."

In her closing remarks, Co-Dean Jessica Berg exhorted the graduates to consider the words of Maya Angelou: “You may not control all the events that happen to you, but you can decide not to be reduced by them.”

Berg told the students, “You will not choose the challenges you face–you certainly didn’t choose the ones you faced these past few years! But you will choose how you react to those challenges. Or in the words sometimes attributed to Abraham Lincoln, 'You can lament that the rose bushes have thorns or rejoice that the thorn bushes have roses.'"