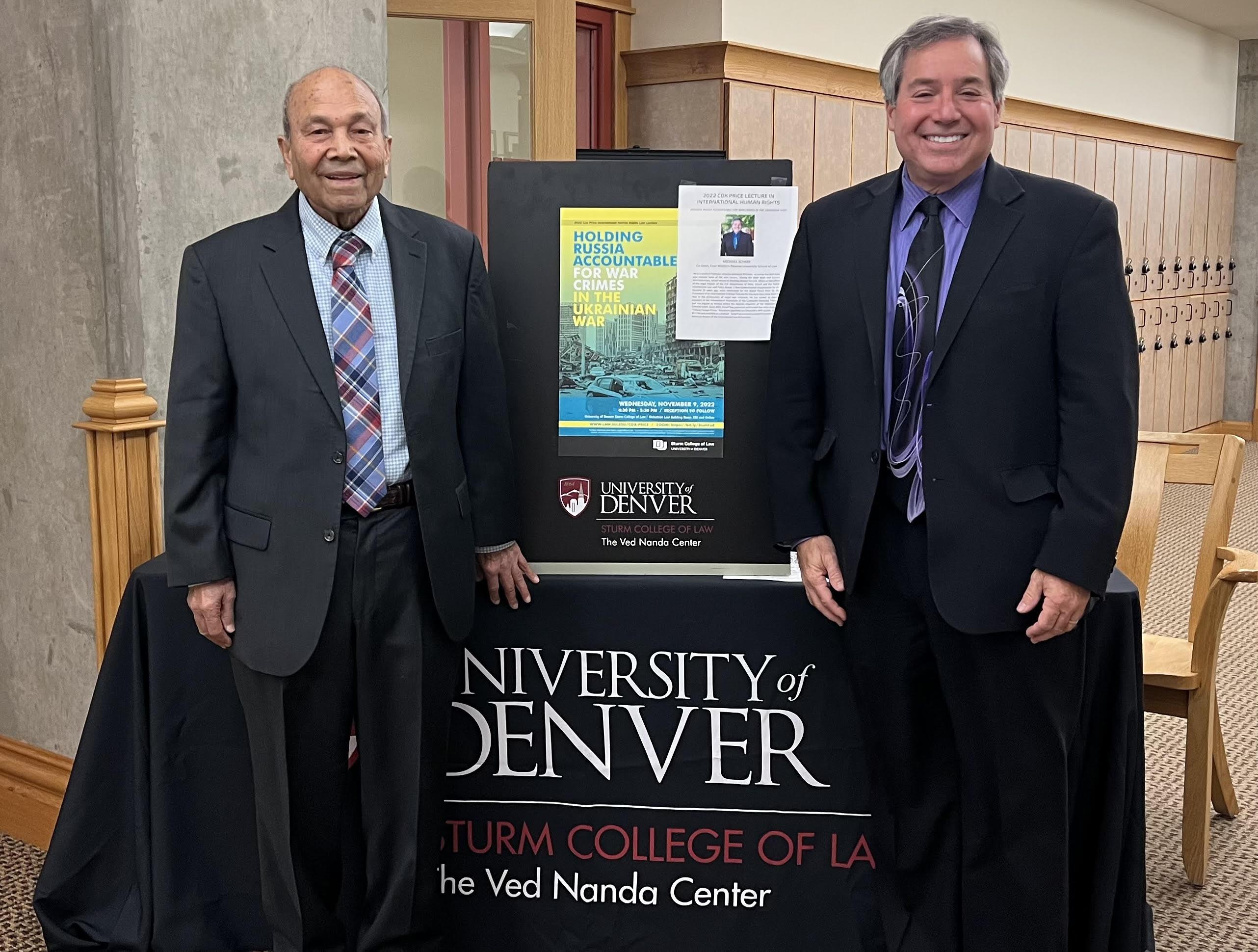 On Nov. 8, Co-Dean Michael Scharf was honored at Denver University School of Law, which bestowed on him the annual Cox Price International Human Rights Award. Scharf and Professor Ved Nanda, founder of DU’s Nanda Center for International and Comparative Law, then engaged in a discussion of prospects and obstacles to prosecuting Russian leaders for international crimes in Ukraine before a packed audience.

Established in 2006 in conjunction with the inauguration of the Nanda Center, the Cox Price International Human Rights Award honors extraordinary contributions in the field of human rights. Recipients include some of the most prominent advocates and influencers on international human rights law such as Brenda Hollis, Chief Prosecutor of the Special Court for Sierra Leone; Cherif Bassiouni, Chairman of the Drafting Committee at the Rome Diplomatic Conference to establish the International Criminal Court; and Edward Luck, the UN Secretary-General’s Special Adviser on the Responsibility to Protect.

"For 35 years Scharf had made an extraordinary impact in the field of human rights and international criminal law through both his prolific scholarship and hands-on work in the field." Nanda said.

Before becoming a law professor and later Dean, Scharf worked in the Office of the Legal Adviser of the U.S. Department of State from 1989-1993, where he served as Attorney-Adviser for United Nations Affairs and delegate to the United Nations Human Rights Commission. In 1995, Scharf co-founded the Public International Law and Policy Group, an NGO that was nominated by an International Prosecutor for the Nobel Peace Prize for assisting in the prosecution of major war criminals. In 2004, Scharf was part of an elite group assembled to train the judges for the trial of Saddam Hussein and during a sabbatical in 2008, he served as Special Assistant to the Prosecutor of the Cambodia Genocide Tribunal. He has led transitional justice missions in a dozen countries and in February 2022, Scharf presented an Amicus Argument before the Appeals Chamber of the International Criminal Court in The Hague on the question of who has the burden of proof on the insanity defense in a case involving a former child soldier.

Scharf is the author of 20 books, five of which have won national book of the year honors. Since 2011, Scharf has been the producer and host of "Talking Foreign Policy," a radio program broadcast on Cleveland’s NPR station and other NPR affiliates across the country, which is also available as a podcast. In 2019 Scharf was selected for life membership in the Council on Foreign Relations, in 2021 he was elected to the Executive Council of the American Society of International Law, and in Oct. 2022, he was sworn in as President of the American Branch of the International Law Association.