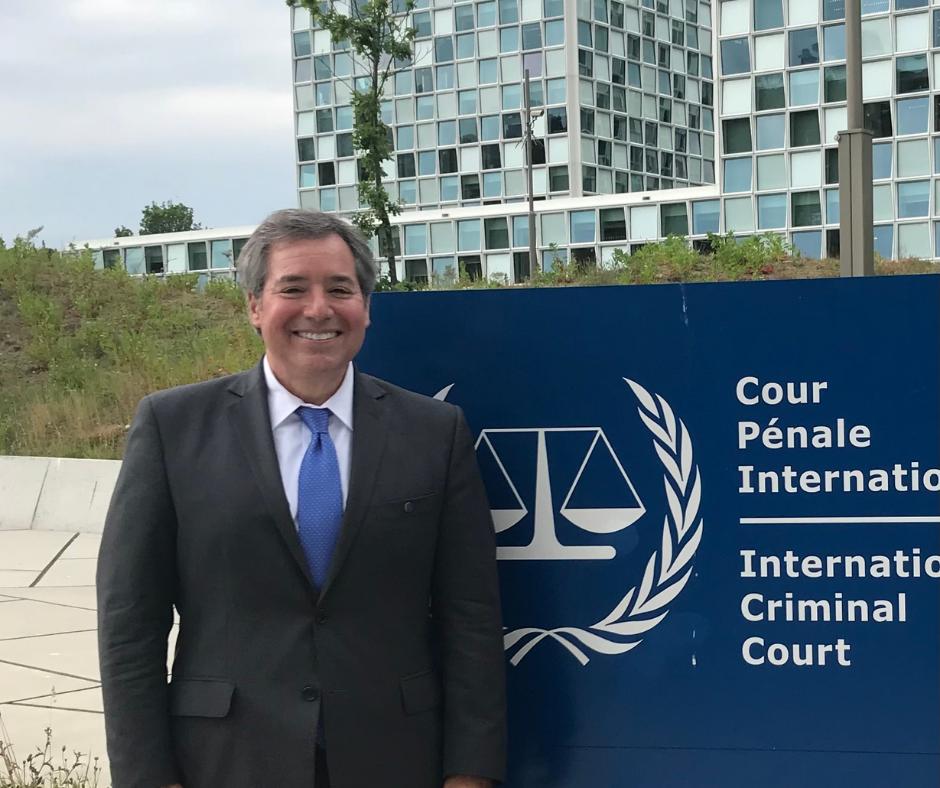 Case Western Reserve University School of Law Co-Dean Michael Scharf will present an Amicus argument before the Appeals Chamber of the International Criminal Court (ICC) in The Hague on Feb. 14 from 8:45–9:15 a.m. ET. Scharf will address: Who has the burden of proof for the insanity defense—the prosecutor or defendant—in cases before the ICC?

Watch his oral argument via livestream.

The Appeals Chamber of the International Criminal Court (ICC) in The Hague invited Case Western Reserve University School of Law Dean Michael Scharf and his colleagues at the Public International Law and Policy Group (PILPG) to submit an amicus brief on the application of the insanity defense in the case of The Prosecutor v. Dominic Ongwen.

The defendant in the case, 45-year-old Dominic Ongwen, had been kidnapped by Joseph Koney’s Lord’s Resistance Army in northern Uganda as an eight year old and forced to become a child soldier. Over the years, Ongwen rose through the ranks to become one of the top commanders in the insurgent group at the time of his surrender to the ICC.

At trial, the defense presented expert testimony that because Ongwen had been forcibly indoctrinated by the Lord’s Resistance Army as a child, he suffered from a mental disease or defect that precluded culpability before the ICC. The prosecution presented its own psychiatric witnesses to counter the defense. The trial chamber held that Ongwen had failed to meet the burden of proving the mental disease or defect defense. It sentenced him to 25 years for war crimes and crimes against humanity including murder, rape and sexual enslavement.

Dean Scharf’s amicus brief argues that the provisions of the ICC’s statute, read in the context of the statute’s negotiating history, should be interpreted as requiring the defense to produce evidence supporting the insanity defense but thereafter requiring the prosecution to prove that the evidence adduced regarding mental disease or defect does not raise a reasonable doubt as to the guilt of the accused.

“Based on the evidence submitted at trial, application of our approach wouldn’t change the outcome,” said Dean Scharf.  "But it’s vital for the Appeals Chamber to clarify the procedure and burdens of proof so that the ICC, now and in the future, can apply standards consistently, not only for the insanity defense, but for all defenses."

“Being invited to submit an amicus brief to the Appeals Chamber of the ICC is a rare privilege,” said Scharf, who co-founded PILPG with Paul Williams 25 years ago and continues to head the NGO’s amicus brief practice.

This is the second amicus brief that Scharf and his PILPG colleagues have penned for the ICC Appeals Chamber. Last year, the Appeals Chamber cited their brief several times in its 2021 decision in the case of the Prosecutor v. Bosco Ntaganda in discussing whether ransacking a hospital after the conclusion of hostilities could be considered a war crime.

Dean Scharf’s amicus brief in the Ongwen case is available on the ICC’s website.

The Appeals Chamber is likely to render its judgment in spring 2022.