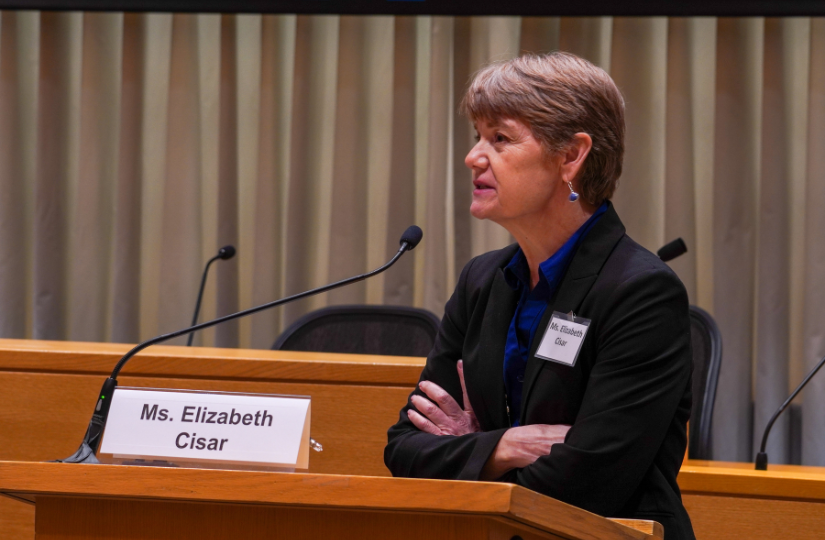 The Environmental Protection Agency’s Elizabeth Cisar, senior policy advisor in the Office of Water, discussed the opportunities and challenges facing the EPA as it seeks to enhance and improve the nation's water quality. Cisar made her remarks, “A View from the EPA,” at the interdisciplinary symposium, “The Clean Water Act at 50,” sponsored by the Coleman P. Burke Center for Environmental Law on April 8, 2022.

Cisar spoke on how the EPA, under the Biden administration, is seeking to restore scientific integrity and address environmental justice in water quality initiatives, while also managing what the agency hopes will be a “transformational investment in water quality infrastructure.” Among the Office of Water’s primary areas of focus at the start of the BIden Administration, Cisar noted, are increasing enforcement, pursuing environmental justice, and “restoring scientific integrity” within the EPA.

“Science is back at EPA,” she commented.

Among the biggest priorities for the EPA’s Office of Water is overseeing Congress’s largest ever investment in water-related infrastructure in the Infrastructure and Jobs Act, the bipartisan bill that passed Congress last year. This law provides the EPA with over $50 billion to improve the nation’s drinking water, waste water, and storm water infrastructure, much of which will be administered by state governments, in accordance with EPA’s guidance. Among other things, Cisar noted, the EPA Is working to ensure that these funds are distributed equitably, with an appropriate emphasis on assisting historically disadvantaged communities.

CIsar also highlighted the EPA’s plan to increase enforcement of Title VI of the Civil Rights Act to address racial discirmination and racially disparate impacts, including disparities in exposure to environmental hazards and pollution and ensure that funded programs do not cause or increase existing disparities. She further noted that the EPA is also taking steps to ensure that funded programs are ensuring that water services are affordable for low-income communities. This is part of the EPA’s effort to ensure it meets “the end goal of environmental protection for everybody, no matter their income or zip code.”

In discussing the EPA’s renewed emphasis on science, Cisar highlighted the agency’s new initiatives to address PFAS contamination and the EPA”s new lead and copper rule to increase protection of public health.

After her planned remarks, Cisar answered questions from the audience including lawyers, engineers and policy analysts. The audience pressed her on environmental justice, cleaning up drinking water from contaminants, and how local agencies, such as the Northeast Ohio Regional Sewer District, can pay for needed programs and federal requirements.

Cisar’s remarks were a part of a day-long interdisciplinary symposium held at the Case Western Reserve University School of Law. Video of the entire program, including Cisnar’s remarks, is available online:

Papers from the symposium will be published in the Case Western Reserve Law Review.