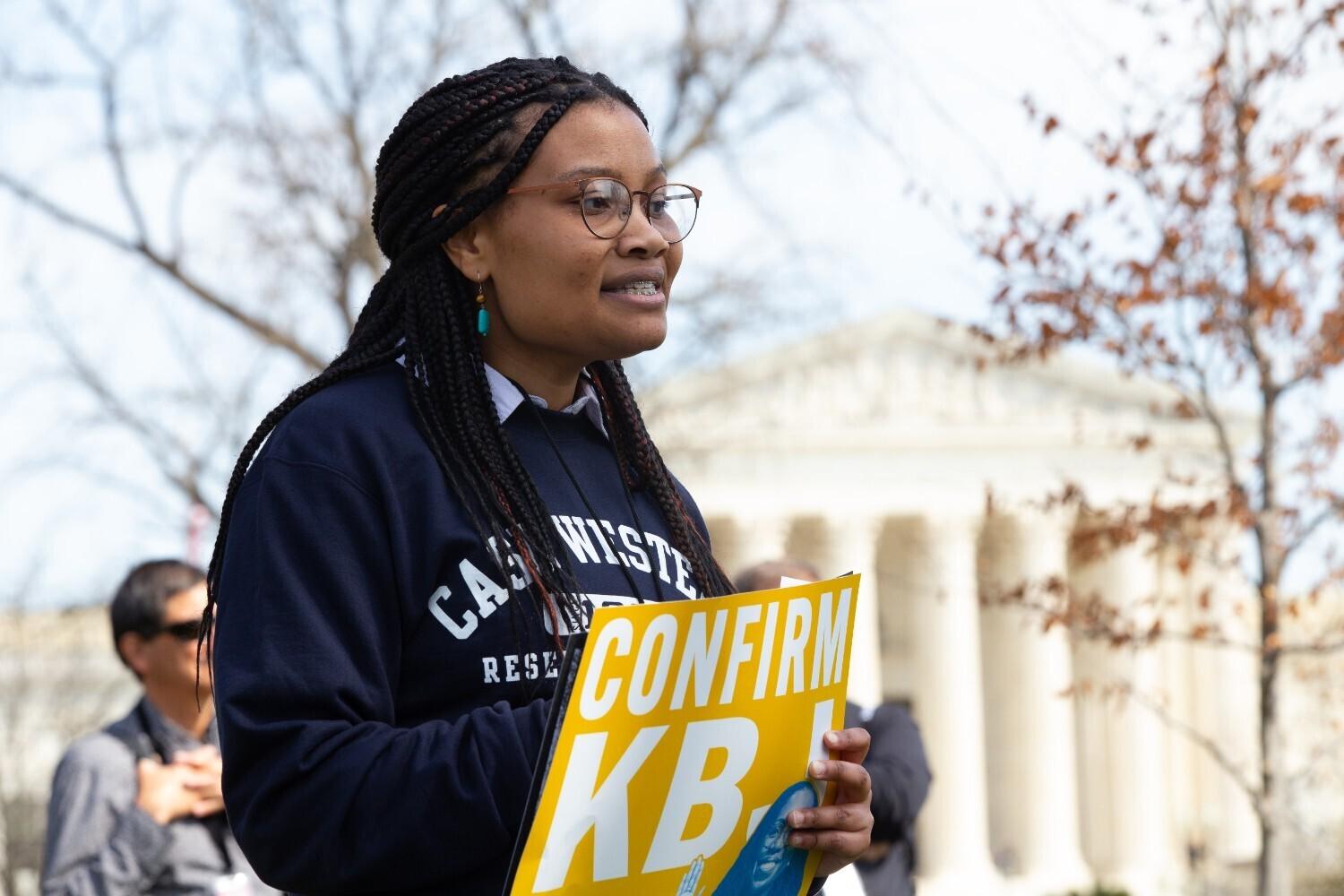 Hayford knew she was an eyewitness to a historic moment in time—perhaps one of the most consequential events she would ever experience in person. When her allotted 30 minutes in the room was up on Tuesday, Hayford returned to a watch party nearby, joining approximately 50 joyful Black law students from schools across the country. 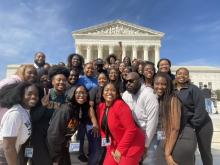 Hayford and other students—most of them women—journeyed to Washington, D.C., courtesy of the groups Demand Justice, Black Public Defender Association and National Black Law Students Association, the latter of which Hayford is a member and past president of Case Western Reserve University School of Law’s chapter. Together, the students celebrated Jackson, who inspired hope that someone who looked like them would soon occupy a seat on the nation’s highest court.

“I don’t know if she saw us or if she even knew we were there. But there is something about the Black law student experience that is universal,” said Hayford, who is co-president of CWRU’s Student Bar Association and also an Initiative for a Representative First Amendment Fellow at Harvard University’s Berkman Klein Center for Internet and Technology. ”When you see someone having their time in the sun and in the light, the right thing to do is be part of that celebration and lift them up.”

As the hearings played on a big-screen TV at the watch party, students tuned in, chatted and made colorful “Confirm KBJ” signs in preparation for a march to the U.S. Capitol building. There, they held a spirited “Have Her Back” rally, where Hayford was among those selected to speak.

“My name is Makela Hayford. I’m a 3L (third-year) law student from Case Western Reserve University. I’m a Black woman. And today, I’m proud,” she shared. “Any person who claims to be invested in law and justice should be excited by her nomination. Beyond being amazing and the first Black woman nominee, there are substantive reasons why Ketanji Brown Jackson is the best choice.”

Near the end of the rally, the students met briefly with U.S. Senate Majority Leader Chuck Schumer (D-NY) and presented him with a declaration of support for the nominee, signed by Black law students from across the country.

Little more than 24 hours after her arrival, Hayford flew back to Cleveland. When asked to reflect on the key takeaway moments of her whirlwind trip, Hayford said: “In school we spend most of our time reading opinions of past Supreme Court justices, and it is not lost on me that I’ve never read one from a Black woman. It will probably be some time until we get to read her dissent or her opinion or her concurrences, but just thinking about the fact that this will happen in my lifetime gives me hope,” she said.

The one thing she wouldn’t dwell on? Her time in the hearing room. As it turns out, Hayford was there when Sen. Ted Cruz (R-TX) held up the book Antiracist Baby by Boston University Professor and National Book Award winner Ibram X. Kendi, asking the nominee whether she agreed that babies are racist. (The book reportedly saw a spike in online sales following the exchange.)

“I didn’t want it to steal my joy or be the main takeaway,” explained the soon-to-be graduate who has a position lined up as a litigation associate at Cleveland’s Hahn Loeser & Parks firm. “It was a really lovely time.”