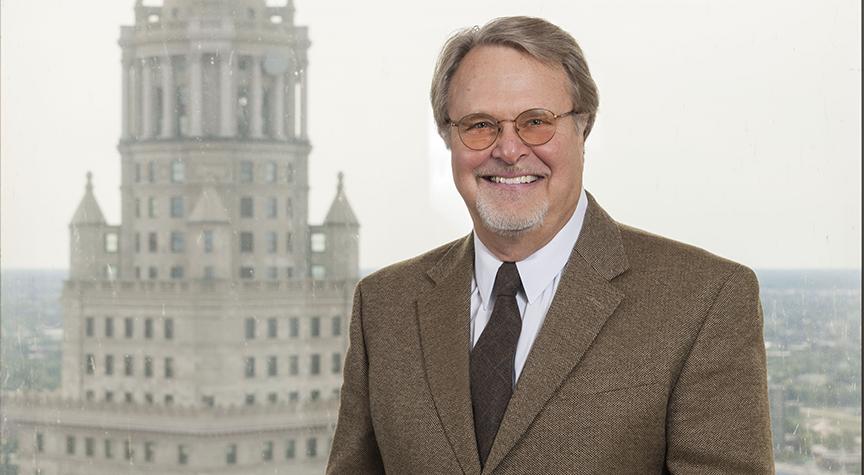 Every year, Case Western Reserve University School of Law honors the achievements of distinguished alumni, faculty and prominent members of the legal community by inducting new members to the Society of Benchers – the law school’s alumni Hall of Fame.

Established in 1962, the Society of Benchers inducts new members on the basis of extraordinary achievement and dedication to the highest principles of the legal profession, as voted on by their peers.

This year, we celebrate 11 new members of the Society of Benchers. While the coronavirus prevents us from honoring the new inductees as we customarily do, with a ceremony and dinner with family, friends and colleagues, instead we will announce one new member each week until Homecoming in October.

John Duff Brown is a retired partner from the Cleveland office of Taft Stettinius & Hollister LLP. Prior to that time he was a partner in the firm of Kelley, McCann & Livingstone LLP, which merged with TAFT in January of 2001. He was AV PeerReview Rated (LexisNexis/Martindale-Hubbell) and he practiced environmental law, administrative and public law, zoning and real estate law and trial and appellate litigation at all levels, both state and federal.

John received his BA from the University of Colorado, Boulder, in 1966 and his Juris Doctor from Case Western Reserve University Law School in 1969. He is proud to say that his father, William H. Brown, graduated with an LLB from the very same building on Adelbert Road in 1938, at what was then the Western Reserve University Law School.  He is also proud to say that the fine faculty which Dean Louis A. Toepfer first put together in 1966 provided a quality of legal education, personal interaction and sage advice that enabled John to confidently take the somewhat unique step of starting his practice of law as a sole practitioner. This enabled John to be able to pursue his passion of environmental law, where he advocated and litigated early generation environmental cases for national, state and local environmental organizations.

John is appreciative for the visionary leadership of Fred Wiseman, President of the Cuyahoga County Bar Association, under which John was the founder and first chairman of the Bar Association’s Environmental Law Committee, which assisted then State Senator Ralph Regula as he was creating the Ohio Environmental Protection Agency in 1972. John was appointed as an OEPA hearing examiner by the Ohio Attorney General to hear adjudication matters before the new agency. Environmental law from the early 1970’s became evermore regulatory and much of John’s practice thereon involved advocacy before various agencies, including the OEPA, The Environmental Board of Review and the U.S. Army Corps of Engineers. He also represented the Cuyahoga County Solid Waste Management District in their early recycling efforts.

John was able to advance his environmental practice by melding it with his administrative and municipal law expertise. John’s 36-year tenure as the Law Director for the Village of Glenwillow utilized such hybrid abilities, thereby helping the Village to navigate through great and innovative change, both environmentally and economically. The close and trusting relationship he enjoyed with the leadership and citizens in helping to guide the Village was awarded in 2010by the Village naming its much-used multipurpose trail in his honor.

John resides in Lakewood, Ohio, and spends much of his time and resources involved in the conservation of natural resources. He enjoys world travel, outdoor sports and visiting his children and grandchildren in Phoenix, Arizona, and Charleston, South Carolina. John is committed to continuing to support the Professor Lew Katz Scholarship Endowment and the law school. He expresses great appreciation for the priceless relationships with classmates and faculty that were forged in law school over 50 years ago. John is committed to honoring those relationships and keeping them intact and alive.