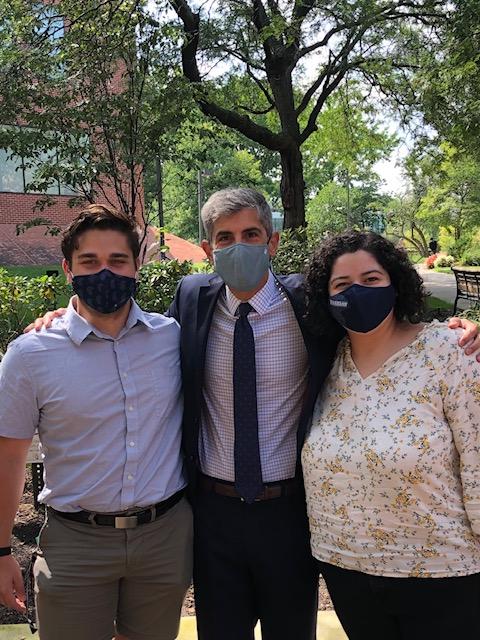 CWRU Law School Students Lucas Allison and Natalie Aguilar worked with Professor Avidan Cover as part of their summer internship with the CWRU School of Law’s Institute for Global Security Law and Society.

Case Western Reserve University School of Law students Natalie Aguilar and Lucas Allison prepared and submitted a complaint to the United Nations (UN) Working Group on Arbitrary Detention and other UN Special Rapporteurs concerning the unlawful detention of a Chinese Uyghur doctor. They filed the complaint on behalf of Rushan Abbas, whose sister, Dr. Gulshan Abbas, has been held in incommunicado detention in a Chinese “re-education” camp for over three years.

“We seek the immediate release of Dr. Abbas,” explained Aguilar. “But we also hope to bring attention to the thousands of others illegally imprisoned, and call for the UN to take action accordingly.”

Allison and Aguilar worked on the complaint with Professor Avidan Cover as part of their summer internship with the CWRU School of Law’s Institute for Global Security Law and Society. They communicated with Dr. Abbas’s family, consulted with human rights experts, researched international law and Chinese and Uyghur histories, and drafted the complaint. The students expect the Working Group to issue an opinion supporting the complaint’s contentions and issue recommendations to China to release Dr. Abbas.

Dr. Abbas, was arrested on Sept. 11, 2018, and eventually convicted and sentenced harshly for alleged terrorist acts. She was arrested five days after her sister, Rushan Abbas, director for the Campaign For Uyghurs, publicly spoke out against China’s persecution of Uyghurs.

It appears that Dr. Abbas was arrested solely because of her association and familial connection to the Campaign For Uyghurs. The complaint details how Dr. Abbas’s arrest and detainment violate numerous international human rights provisions, amounting to an arbitrary deprivation of liberty.

The complaint further documents how Dr. Abbas’s mistreatment is part of the Chinese government’s systematic human right violations and crimes against its minority Uyghur population. Uyghurs are an ethnic minority in China who consider the Xinjiang Uyghur Autonomous Region province their national homeland. Chinese government officials, however, have openly characterized Uyghurs as “disloyal to the state” and “terrorists” for simply practicing their minority religious beliefs (Islam) and minority language. Consequently, China has detained over one million Uyghurs, constructed over 1,300 “re-education” camps, and implemented mass surveillance systems.

“Dr. Abbas’s case is an all too familiar example of the lengths China will go to silence political dissidents abroad,” Allison said. ”Rushan has shown China that these tactics will not work, as she continues to fight for her sister. Helping Rushan advocate for Gulshan’s release, and contributing to the international community’s understanding of the situation in Xinjiang, was a rewarding experience.”