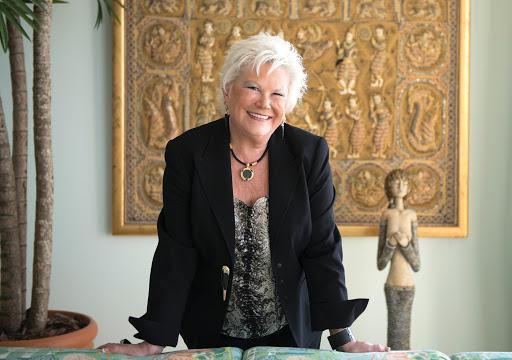 Roe Green, an arts patron and community activist, is Chief Executive Officer of the Roe Green Foundation. Her father was federal district Judge Ben C. Green (Class of 1930), one of the most distinguished graduates of the law school, who passed away in 1983. In 1999, the Green family established the Chaired Professorship in his name that is currently held by Jessie Hill, one of our most accomplished professors. In 2006, the law school unveiled its completely renovated Judge Ben C. Green Library, made possible by a generous gift from Roe in honor of her father. Now, down the hall from the library, Roe’s generosity will make possible “Ben’s Place,” a reimagined student center and events space featuring a giant media panel which will be the site of the 2021 Reunion Dinner next fall.

Q:  You’ve had an exciting career that includes being an award-winning Ballroom dancer, Stage Manager for the Singing Angels and Cleveland Opera, a theater producer, a community activist, a philanthropist and now a Trustee of our University.  What moments really stand out for you?

ROE: Every day is a gift and a joy.  And every time I am thanked for my contributions, it’s special to me.  Recently, I helped establish a program with the Dramatists Guild Foundation called the “Roe Green Traveling Masters Program.”  It’s a national education program providing students, professionals and theater lovers with free masterclasses, workshops and public events on the craft of playwriting.  They flashed my name in lights on a theater in New York where we were having the benefit for the program.  Not quite a Broadway marquis but really exciting.  The program has now reached 1,500 people in all 50 States.

Q:  You’ve also been blessed with the opportunity to travel to exotic locations around the globe and you recently gave a naming gift to the UH Travel Clinic to help ensure that travelers are healthy during their adventures abroad.  Can you tell us about one of your most memorable trips?

ROE: I love to travel.  And I usually go on my own using a travel company.  People always ask what is your most favorite place?  And I answer truthfully — wherever I happen to be. I take wonder trips. I wonder where I am going, I wonder where I am and isn’t it wonderful?  I’ve been to a lot of exotic places, such as India, Mongolia and the Stans.  I’m not one of these people who do a whole lot of research before a trip. But I often do a lot of reading about where I’ve been when I get back home.  One place that stands out was my trip to Libya. While there, I visited the amazing Roman ruins on the shores of the Mediterranean.  Very few westerners have seen these vast and well-preserved archeological sites.  Access to them was closed shortly after my visit. They were exquisite. A very special place.

Q: You’ve been referred to as the “fairy godmother to the arts,” having made inspiring gifts to build the Case Western Reserve University and the Kent State performing arts centers and to your alma mater, the University of Colorado, for an endowed Chair in Theater. You are actively involved with the Cleveland Play House, Porthouse Theatre in Cuyahoga Falls, Chautauqua Theater Company, Colorado Shakespeare Festival, Shaw Festival in Niagara-on-the Lake and last year you were awarded a lifetime achievement award for your contributions to the art world.  What drives your passion for the arts?

Q:  You have also made several transformational gifts to our Law School in honor of your father. Can you tell us a little about Judge Green?

ROE: He was a very special man. There are a few words that jump to mind— integrity, honesty and fairness.  He had a great sense of humor. And he was humble and caring. But most of all he was very giving. Dad always said that “charity begins at home.” Here’s an example. You know federal judges naturalize new citizens? There was an elderly women who had been hospitalized and couldn’t come to the court. So dad went to her hospital bed and gave her the oath of citizenship there. He was always doing things like that.

Q:  What advice do you think he would give today’s law students?

ROE: It comes back to integrity. He felt that character was important for success as a lawyer. He was also very practical.  He taught me that education without common sense is like a bunch of books on the back of a jackass. That particular quote comes from me, not from him. And I have a sign that says that in my house. But that was something he believed deeply.

Q:  The law school’s new student center and events space will be called “Ben’s place,” a much less formal moniker than given to the Judge Ben C. Green Law Library.  Can you tell us how you decided on that name?

ROE: It was during a dinner with the law school deans and my right arm, attorney Gene Kratus. When we discussed the idea of a transformational gift for that important law school venue, Gene said we should call it “Ben’s Place.” My Dad would have gotten a real kick out of that. There’s a photo on my mantle of Dad and me where he is laughing. He was very human.  His friends used to call him “gentle Ben.” The law students see the formal picture of him in the library, but this was also an important side of him. And that name really captures that. It’s a warm name for a warm man.

Q: You once described your philosophy of life in terms of oranges. Can you tell us about that?

ROE: I have five oranges.  I eat one.  I save one.  And I give the other three away.  And that is just the way I live my life.

Q: Well, we certainly have been the beneficiary of that here at the law school.  Thank goodness for you and your generous spirit!

ROE:  I’m involved in over twenty-two organizations, but I care very deeply about the law school and appreciate the way it has paid tribute to the legacy of my dad. I established a scholarship, a professorship and the library was named for Dad. I’m pleased to make Ben’s Place possible as the social heart of the school.